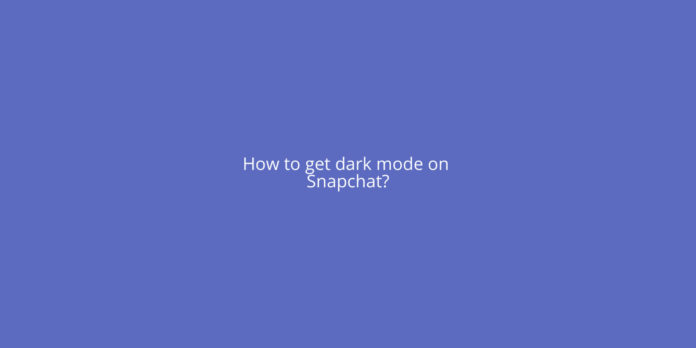 For mobile apps, dark mode popularity peaked in 2019. Every other software developer was working hard to get their apps to support dark mode. Entering the dark side has never been easier than it is now, thanks to the widespread availability of dark themes for both Android and iOS. Snapchat, on the other hand, defied the industry’s established norms. This year, the photo-centric messaging app finally added support for dark mode on iOS, and Android users should expect it in the near future. We’ll walk you through the process of turning on Snapchat’s dark mode today.

What is Dark Mode?

The app’s color scheme is darkened in Dark Mode (sometimes referred to as “night mode”). If you expect to stay up for a while with the lights out, you can refer to this display setting as “bedtime mode.” Facebook and many other apps, like Snapchat, allow you to enable Dark Mode.

It is possible to use your phone or another smart device at night without straining your eyes or making it difficult to sleep because of the Dark Mode feature. It’s a shame that night mode isn’t available in every app; even some of the most popular ones haven’t yet included it.

It doesn’t matter if other apps can do it or not; here’s how to turn on Snapchat’s dark mode.

How to Turn on Dark Mode in Snapchat on Your iPhone?

How to Turn On Dark Mode on Your Android Phone?

On Android, Snapchat does not currently have an official dark mode setting. This section will be updated as soon as Snapchat releases the dark theme for its Android app. The closest you can come right now is to enable the “forced systemwide dark mode” option in the developer options. While it isn’t perfect, it is preferable to gazing at Android’s present retina-blinding light option. So, if you want to force-enable dark mode in Snapchat for Android, here’s how you accomplish it:

Note: Unfortunately, recent Snapchat versions do not respond to forced dark mode, and the Android app remains in a light theme. As a result, you must download and install an older version of Snapchat from APKMirror.

How to Turn On Portrait mode in Snapchat on iPhone?

Portrait mode on Snapchat does not operate out of the box in iOS 15, nor will you find a setting to enable it within the app. Also, keep in mind that the portrait effect is only available when using the front camera.

Follow the steps below to enable Snapchat’s portrait mode in iOS 15.

How to turn off Portrait mode on Snapchat in iOS 15?

The portrait effect on Snapchat is not enabled by default with iOS 15. If you mistakenly activated it and wish to remove the blur on Snapchat, you can do so.

To disable Snapchat’s portrait mode on an iPhone running iOS 15, follow these steps.

How to turn Focus mode on or off on Snapchat?

Open the Snapchat app and go to the camera or viewfinder menu to enable Snapchat’s Focus mode. To access the effects and tools menu, click the drop-down arrow in the upper-right corner of the screen. As soon as you’ve turned it on, touch the “Focus” option. Your images would be instantly enhanced by the background blur effect.

Other ways to get Snapchat’s dark mode on Android

If you’re an Android user, Snapchat’s discriminatory policy is certain to annoy you. To avoid boredom while you wait, here are a few suggestions. You’ll likely obtain the feature sooner than others if you follow these suggestions:

Solution 1: Look for an update

Snapchat will most likely release the dark mode via a software update when it makes a final decision. In most cases, software updates are deployed automatically while your phone is either idle or charging. However, if you’re looking for the fastest possible delivery, you’ll need to actively check for updates.

After pressing and holding an app, tap the information icon at the top-right corner of a popped-out window to look for an app’s latest version. Once you’ve done so, go to the bottom of the page and click on “App details in-store.”‘ You’ll be redirected to the app’s listing on Google Play. The button at the top will indicate whether or not an update is available. Update the app by clicking on it. In the best-case scenario, you will immediately see the ‘App Appearance’ area.

Solution 2: Play around with Preferences Manager [Root Only]

This procedure is solely for rooted Android smartphone owners, as stated in the headline. So, if your phone is in good working order and you don’t want to give up official software updates or even the manufacturer’s warranty, we propose that you check into the alternatives.

Preferences Manager, on the other hand, can be quite useful if you already have a root-enabled Android phone in your possession. Snapchat’s dark mode is one of the experimental features that can be unlocked with this app. Tap on ‘Snapchat’ after you have downloaded and installed the Preferences Manager app from the Google Play Store.

After that, you should open the ‘APP_START_EXPERIMENT_PREFS.xml’ file. You should see the ‘DARK_MODE’ flag inside the app. Simply set it to ‘ENABLED’ and exit the app.

When you return to Snapchat, the dark theme should be present.

Many features are available to iOS users before they are available to Android users. And Snapchat’s dark mode is no exception. Snap tested the dark mode for more than a year before making it available on iOS devices and we expect that the same treatment would be given to Android users as well. As soon as the functionality is ready for testing, we’ll keep a close check on it. Snapchat has yet to make an official announcement on when the feature will be available to all users.

How To Disable Edit Suggestions From Users in Google Docs (PC/Laptop)?

How to change Facebook marketplace settings to local only?

What Is ‘Google X Enrollment’ Notification? How To Get Rid Of...