Home Gaming Skyrim: What is the max level? 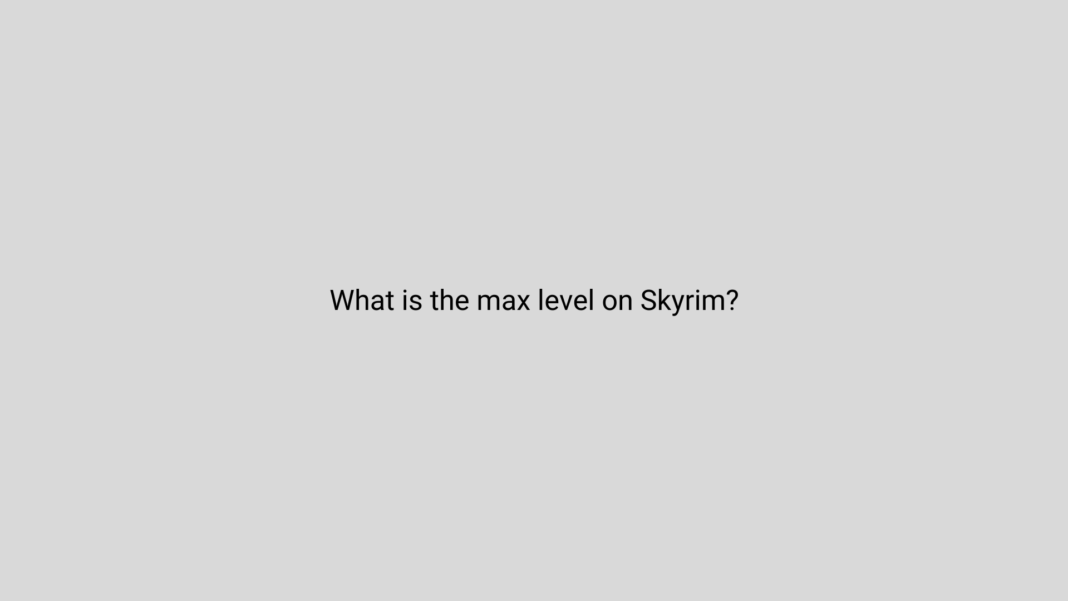 Skyrim is one of those Elder Scrolls games wherein the leveling is dependent on each of the 18 skills of the player. Thus, leveling up of skills results in overall leveling up in the game.

This raises the question: What is the max level in Skyrim? In this article, we shall discuss the level cap in Skyrim both before the latest update of Patch 1.9 and after it.

Before Patch 1.9 was released, Skyrim had a maximum level cap of 81 levels. Since experience increases with the levels in Skyrim, once you had reached level eighty-one in the game, it was impossible to gain any more experience.

Also, it is important to note that 81 is the maximum level you could reach in Skyrim without making any skill ‘Legendary.’ Now, what is a Legendary skill? If you have a skill at level 100, then it can be made into a Legendary. However, here is the catch: You lose all the benefits of having a higher skill level!

The silver lining to making your skill Legendary is that you can continue to level up and earn additional skill perks. Another thing worth noting is that there is an increase in difficulty since the antagonists in the game will not have their skill reduced.

There is a formula for deriving the linearly constant amount of ‘experience’ that is set as a prerequisite for each level. It goes as:

Although there was a dead end or a maximum level cap in Skyrim before the release of Patch 1.9, as soon as the game received the patch, there is no maximum level in the gameplay anymore.

The skills still operate on the same principles, such as a skill of one hundred can be made ‘Legendary,’ and once you choose to do so, the perk points in the specific tree back and given to you, while the gift is reset to fifteen.

Also, the difficulty level has escalated, and now, the enemy too has increased skills. The level cap of 81 levels is removed after Patch 1.9 by allowing gaining levels in a particular skill by leveling again.

The controversy regarding the level cap in Skyrim after Patch 1.9

Now we are given to understand that post Patch 1.9, there is no maximum level in Skyrim, thus obliterating a level cap in the game. However, many users are of the view that it is not possible to not have a level cap in computer logic. Why? Because number values have limits and since there is a ‘limit,’ having no maximum level in the game is kind of next to impossible.

Now, this may be a valid argument, since when you set up the game on your computer and start experimenting with the character’s level, here is what you may observe:

It makes sense, after all, since a 16-bit unsigned integer can store a maximum value of 65, 535. Now, for any game, if you ask the computer to add a value to the ‘maximum value,’ which seems to be 65, 535, it is only obvious that the value will reset to zilch, that is 0.

Of course, this is an observation that is not based on manual leveling up but upon setting up the level of your character using the console. Since manually leveling up to 65, 535 levels is time-consuming and outrageously hard, we are not sure if there is a level beyond 65, 635 (as said by the developers). For now, all we can do is take the word for it!

How does leveling up in Skyrim work?

Before we move on to explain how you can level up in Skyrim, it is important to know the mechanism that goes behind it.

To begin with, your character in the game has two levels – one is the overall level, and the other is a set of individual levels required for each of the 18 skills.

Now, these 18 skills can be broadly categorized into three disciplines; these disciplines are displayed under the star signs for the Thief, Mage, and Warrior.

Unlike the Elder Scrolls games before, Skyrim is a standout. This means that the leveling system in this particular game is almost completely dictated by the usage of the skills themselves. This is why it is legit to worry about the ‘class’ of the skill that you chose.

Since there is a maximum level of 100 in every skill tree, all characters, including yours, level up their skills at the same speed with use. Now that we are talking about skills, here is a little about individual skills:

Now, every time your character levels up, you will unlock a Skill Point to spend on a Perk within any skill tree of your choice. So, what perks do you unlock?

This is decided by two factors: the level of your skill and the progress you make along the skill tree.

We believe we have covered the mechanism of leveling up in Skyrim, which brings us to the objectives we shall be aiming at when you want to level up. Roughly, you will have two objectives:

How to Catch a Squid in Stardew Valley?

How does Augmenting Ancient Items in Diablo III work?

Can You Use Two Graphic Cards at the Same Time?

ABOUT US
Yoodley simplifies purchasing decisions by comparing multiple products for people who want to save the time and stress of deciding what to buy.
FOLLOW US
© Yoodley 2021