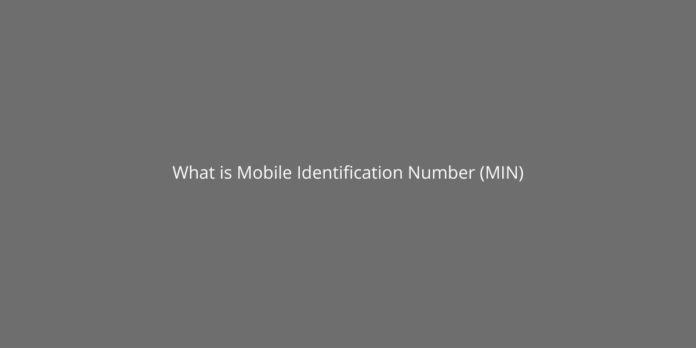 Cell phone service subscribers are identified within a mobile carrier’s network by a serial number known as a mobile identification number (MIN). Service providers use this to identify their customers in their database, especially when directing calls.

MINs are comprised of 34 bits in total. The initial 10 bits are referred to as MIN2 in some contexts, while the last 24 bits are called MIN1 in those contexts. They are referred to collectively as the MIN for short.

The International Forum on ANSI-41 Standards Technology (IFAST) is the organization responsible for assigning the mobile carrier identification numbers. An IRM is the name given to a MIN when it is presented in this manner (International Roaming MIN).

The MIN is not a characteristic of the actual phone in the same way that the IMEI is. The Mobile Identification Number (MIN) is kept in a database that is managed by the cellular service provider and can be updated at any moment.

What Is A Phone Number?

It’s likely that the answer to this question is obvious. Because almost everyone has a phone number, most people know exactly what it means.

Even at the most basic level, phone numbers are nothing more than a string of numeric characters. The IP address of a computer can be compared to a phone number. A phone number is like a street address since it tells the system how to find the person you’re looking for.

A landline, or fixed telephone line, is used to dial and connect the number, depending on who provides it. Providers that use the PSTN (Public Switched Telephone Network) are then connected to the number or a wireless telephone device, such as a cell phone.

The Difference Between MIN and Phone Number

MIN is comparable to regular phone numbers and mobile phone numbers, however, they are not the same thing. The Mobile International Number (MIN) is a 10-digit number that is derived from the mobile phone number in the majority of nations. MIN 1 and MIN 2 are the two distinct components that make up the whole of MIN

Even while the Mobile Subscriber Identity Number (MSIN) or MIN can be generated from the mobile phone number of the subscriber, this does not mean that they are the same thing. In fact, in some instances, they can be entirely different. If a subscriber changes their phone number, for instance, they will maintain the same MSIN number even after the change.

After the advent of mobile number portability, which allowed subscribers to migrate between multiple carriers, the usage of mobile identification numbers (MIN) became widespread. This was necessary because the mobile/subscriber directory number was a less desirable means to track users.

What Is The Difference Between An Extension And A Line?

The days of enterprises installing and using complicated landline phone systems are rapidly dwindling. Because of its cost-effectiveness and practicality, many organizations are transitioning from traditional phone services to corporate VoIP.

With a VoIP system, organizations can operate from any location while maintaining a high-quality connection. In addition, VoIP systems make it easier to maintain high levels of productivity.

Businesses who choose a VoIP service rather than a slew of single-line phones will actually notice a reduction in their telecommunications expenses. Increasing efficiency and improving business communication are two other advantages of implementing an electronic phone system.

It’s unfortunate that so many individuals are unaware of the differences between traditional business phone systems and those that utilize the internet. Internet-based communication services use equipment and technologies that differ greatly from what businesses use on a regular basis.

In order to make the transition from a landline to a VoIP phone system, a business may want to learn how a phone number, phone line, and extension are all distinct entities. Businesses may make an informed decision about the future direction of their communication system and how to stay relevant in the digital world by understanding the distinctions between them.

What is an Extension?

In the days before VoIP, every phone line was linked to the public switched telephone network (PSTN). Centrally located lines are connected to each other through the use of the PSTN. Employees can use it to reach a dedicated extension.

Like a phone number, an extension is a four-digit code that can be used to access many resources. In essence, the four digits constitute an add-on to the primary phone number.

The extension is the home number if the phone number is compared to a street address. “

Extensions are phone lines that are part of a private branch exchange (PBX) system when using a business phone system. In essence, a PBX system is a switchboard that eliminates the requirement for an external line to link several phone lines within a single office.

There are a number of different phone functions that can be added to each user’s extension. Call forwarding and text messaging are among the phone’s configurable functions. Calls can be diverted to a different extension by the user.

What is a Phone Line?

The term “line” is frequently used when discussing the differences between extensions and phone numbers. What exactly is a “line”? There is a line associated with every phone number. Telephone wires have always been referred to as “lines.” The PSTN is plugged into the circuit.

So, How are a Telephone Line, and an Extension Different?

A phone line and an extension are two different things.

For example, a phone number serves as the “address.” The extension is the house number to the street address, making it a more precise component of the address. The phone is connected to the line.

Only two individuals can talk on the phone at a time if a company has five extensions, each with two lines.

Businesses must ensure that they have enough phone lines when setting up a phone system.

It is possible that the future of the telecom business will be clouded by the proliferation of text messaging on mobile phones and the use of messaging applications.

Message-sending applications like iMessage and WhatsApp are responsible for more than 80 percent of all transmissions of text messages. About a third of all voice over Internet Protocol and international voice traffic is carried on Skype.

As a result of this, telecommunications service providers are confronted with a number of difficulties, including a decline in their revenue, an increase in the amount of competition, and the struggle to maintain their relevance in the sector.

In the end, companies need to have an awareness of the origin of phone numbers, how they function, and the direction the industry is moving in order to be successful. If organizations are aware of all of this information, they will be able to design more effective communication systems and figure out how to boost productivity in the workplace.

Yes. It is not uncommon for companies to maintain more than one phone number in their records. The question that needs to be answered is why a company would need several phone numbers.

The ability of the company to maintain departmental autonomy is one advantage that comes with maintaining several phone numbers for its employees. A company may, rather than having a single phone number that everyone in the company phones for any concerns, have distinct phone numbers for things like sales, shipping, customer service, and so on.

Customers, both prospective and existing, have a simpler time contacting the appropriate department of the company when various phone numbers are provided. Additionally, organizations may want their salespeople to have access to more than one phone number for a variety of reasons.

Another, albeit more complicated, reason to have more than one phone number is to take advantage of geo-targeting. When a company has multiple phone numbers in each area code, its salespeople can give the impression that they are phoning from a number in their respective area. There are a lot of cool things that can be accomplished using VoIP, such as diverting calls to a different number depending on the location of the person making the call.

A virtual number is a telephone number that is not directly coupled with a specific telephone line. This type of number is often referred to as direct inward dialing (DID) or an access number.

In most cases, these numbers are configured to redirect incoming calls to one of the other pre-set telephone numbers, such as a fixed, mobile, or VoIP number, as selected by the customer. A virtual number can function as a gateway between regular phone calls (PSTN) and voice over internet protocol (VoIP) calls.

Subscribers to virtual numbers are able to utilize their existing phones and do not need to acquire any extra hardware; instead, they may take advantage of the vast variety of applications that are already accessible.

The term “virtual private number” refers to a telephone number that can direct incoming calls to any one of a number of different pre-determined telephone numbers. These are also known as follow-me numbers, virtual telephone numbers, and Personal Numbers in the UK. Another name for these is portability numbers.

Using time of day routing, a virtual telephone number can typically be programmed to forward calls to a variety of other telephone numbers based on the time of day and the day of the week. For instance, on working days, incoming calls will be forwarded to one’s place of employment between the hours of 9 and 5, but on the weekends, they will be forwarded to one’s mobile phone.