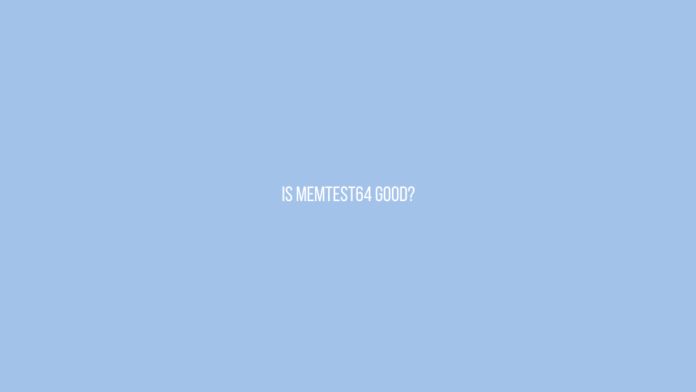 In this article, we will understand whether Memtest64, a free, lightweight, standalone utility that allows you to check your system memory for problems at the hardware level, is good or not. A graphical user interface and the ability to run from within Windows are among its main features.

Memory hardware errors can result in severe application crashes, blue-screens of death (BSODs), and data corruption, among other problems. A malfunctioning piece of hardware or improper memory timings/frequency are the sources of the problem.

Memtest64 is a programme that allows you to test your memory without having to use an MS-DOS boot disc. The utility loads test-patterns into your physical memory and has the ability to push other applications into the pagefile in order to free up memory for testing.

It can also be beneficial to overclockers who are attempting to maximize memory performance by experimenting with timings and DRAM speed settings.

Quite simply, MemTest64 is a modern and lightweight programme that comes equipped with a graphical user interface and is capable of thoroughly testing the RAM for a variety of errors. For this purpose, it runs a number of intensive test patterns in the RAM and pushes all currently running applications into the pagefile in order to free up RAM.

Though not as complex as MemTest86 or Karhu’s tool, the stress tests can definitely detect faulty hardware or memory sectors that have become corrupted over time. MemTest64 can also sync the speed of your DRAM with the frequency of your overclocking, allowing you to get the most performance out of your RAM. MemTest64 is a capable software that you should consider using in conjunction with one another.

MemTest64 is an excellent tool for identifying errors in RAM. As a result, the rate at which it detects errors is inversely proportional to the extent to which the RAM is corrupted. The more broken it is, the quicker it is at identifying errors.

If there is a problem with the RAM, MemTest64 will find it within 10 seconds in 90% of the cases, and in 99 percent of the cases, a single pass will be sufficient to identify the problem. In most cases, the longer it takes to identify the problem, the more subtle it is, and the less likely it is to be the source of a problem with your computer (but you should still get new ram if you get even one error)

With MemTest64, you can stress test RAM without spending a dime or having to navigate through the bootable mess.

What else is good about MemTest64?

When does MemTest64 error out?

It will fail in three critical situations:

You can download and use MemTest86 if you need a more powerful testing tool. It runs a wider range of tests and may uncover issues that the Windows test will miss. The most recent versions of this tool include a paid version with additional features, but the free version should suffice. You are not required to pay anything. Because MemTest86 is signed by Microsoft, it will run even if Secure Boot is enabled.

If you want to try something else, MemTest86+ is a free and open-source programme.

MemTest86+ is a newer version of the MemTest86 software that can run on both x86 and x64 machines.

It’s available in ISO format for burning to a USB flash drive or disc for free.

MemTest86+ doesn’t beat MemTest86 in the list because it works remarkably similarly to MemTest86 and doesn’t appear to be actively developed anymore.

MemTest86+ can be used as a good second opinion after MemTest86, but Windows Memory Diagnostic will provide a more comprehensive set of tests because it works differently.

Both of these programmes are self-contained and bootable. You can copy a USB image from MemTest86 to a USB drive. To create a bootable USB drive, simply run the EXE file included with the download and provide a spare USB drive.

Restart your computer after you’ve created bootable media and tell it to boot from the USB drive where you copied the memory test tool.

When the tool boots up, it will begin scanning your memory, performing test after test and informing you if it detects a problem. It will continue to run tests until you tell it to stop, allowing you to see how the memory behaves over time. On your screen, you will see information about any errors. You can exit it and restart your computer by pressing the “Esc” key when you’re finished.

How to run MemTest86?

Here are the steps for running MemTest86:

How do RAM Testing Tools Work?

Your computer’s working memory is stored in its random access memory (RAM). Memory (RAM) serves as a constant source of information for your computer’s operating system and applications. When you view this web page, for example, your web browser temporarily stores it in RAM for later use. As soon as you start a PC game, the game loads data from slower system storage (like a solid-state or hard drive) into much faster RAM.

Having a computer with faulty RAM can cause issues. When you go to read RAM, your computer will find different data than what you saved to it. As a result, data corruption, application crashes, system freezes, and blue screens of death may occur.

These programmes work by sequentially writing data to and reading it from the RAM of your computer. It’s possible that your RAM is faulty if the tool returns a different value.

In order to use the best RAM testing tools, you must boot into a special bootable environment. To ensure that the tool has complete low-level access to your RAM, you can disable Windows (or another operating system).

Why should you test your memory?

Checking the health of your computer’s memory is a good idea when you first install one or more RAM sticks, build, or purchase a new computer. When you first turn on your computer, the BIOS runs a quick test called the POST test to see if there are any memory errors. Many times, a problem with your computer’s RAM can be the root cause.

For example, faulty RAM could be the cause of your PC not booting to the OS or rebooting at random.

When the BIOS screen or beep codes display error messages or you hear beep codes, the RAM becomes a suspect. When your apps crash or you get a Blue Screen of Death out of nowhere, the same holds true.

Your motherboard may not be compatible with the memory. As a result of overclocking your RAM, it may not be able to handle the increased workload. One of the RAM sticks could be seated incorrectly, or its port could be defective.

If you notice any of these symptoms, the best thing to do is run a memory test with the RAM test software. The way they work is by writing data to the PC’s memory and then reading that data back from it. If the utility returns an incorrect value, you have a problem with your RAM.

We have included 5 tools for thoroughly testing the RAM against inefficient read and write speed, hardware glitches, paging errors, caching and more.

AIDA64 Extreme is the best software to stress test RAM if you don’t know much about hardware components or stress testing. It’s a simple program that lets you put your RAM to the test with intensive tasks like quick read, write, and flushing operations. It also examines RAM bandwidth and latency issues using multi-threaded memory and cache paging.

AIDA64 Extreme, on the other hand, uses only RAM to perform multiple processing tasks such as physics and mathematical calculations. Furthermore, the application provides you with a benchmark score so you can compare your RAM capability to that of other PCs. Overall, AIDA64 Extreme is an excellent application for general users, and you should try it out.

If you’re a Linux user, you can check your RAM and other memory devices with the Stressful Application Test. Google created the application and released it under the Apache 2.0 license. This software allows you to increase randomized traffic on memory and I/O components, putting a heavy load on RAM as a result.

The following command can be used to quickly install the software from the terminal: stressapptest sudo apt-get install You can also specify your own parameters, such as./stressapptest -s 20 -M 256 -m 8 -W, which tests 256MB of RAM for 20 seconds with 8 “warm copy” threads.

While Prime95 is included in our list of CPU stress testing tools, it can also be used to check RAM for errors and instability. Prime95 has a variety of modes, but the Blend test is the best way to fully test the RAM. If you have some experience with this topic, you can select custom and set the parameters yourself. However, I would recommend unchecking the “in-place” box, increasing the range to 448K-4096K, and allocating at least 70% of RAM.

This will undoubtedly put your RAM to the limit, revealing any errors that may have occurred. To get an accurate picture of RAM performance, run the test for at least two hours. To summarize, Prime95 is a powerful programme that you can trust to test your RAM.

Karhu’s RAM Test application is the best bet for you if you don’t like MemTest86’s UI or its bootable approach. It has a standard graphical user interface (GUI) with a straightforward design and numerous advanced features. This programme can be used to check for hardware errors in your RAM or to see how it reacts after being overclocked.

It uses a number of advanced algorithms to stress test the RAM by generating random numbers. RtlGenRandom and XORWOW are two functions that disable the CPU cache and enable sequential memory block writing. Simply put, for many system builders and overclockers, Karhu’s RAM Test has proven to be a reliable stress test tool over the years.

Computers with faulty memory can malfunction, crash, and behave in a variety of ways, which can be perplexing to both end users and IT professionals. Most Apple products come with hardware test CDs, and there are a few third-party macOS memory testing utilities.