Imagine buying an expensive (or even a new) Samsung phone, only to realise that a while later, that much-coveted and sleek rear back starts falling off.

For the newer phone models launched by Samsung such as S9, 10, Note 10, Note 10+, S21 Ultra etc, a number of them feature rear glass backs that enhance the overall appearance of the phone. We noticed that most of the ‘rear glass coming off’ problems mostly stemmed in the newer models of Samsung phones.

So, what exactly causes the issue?

Here are a few reasons why your Samsung Rear Glass could be coming off:

If you have a somewhat brand new Samsung phone and the rear glass is coming off, there are very high chances that the adhesive that sticks the rear glass to the phone is loosening up.

The major issue with the usage of cheap adhesives that start to loosen up is that dust and other fine particles start settling within the gap created. This could damage the camera or render it blurry while also causing problems for other components of the phone.

You could try contacting the customer service (not sure how much help that would be, especially if you have an expensive Samsung phone that is still under warranty) to try and get the problem fixed or the phone replaced.

Again, if you have recently bought the phone, battery-swelling should be an unlikely cause. However, a handful of Samsung users reported battery swelling as the major cause of the Samsung rear glass coming off.

If you use an original Samsung charger, be it wired or wireless, this issue should not occur, especially for newer phones.

You should try looking inside from the gap to check if the battery is swollen. If it is, you will either have to get it replaced and if the phone is still under warranty, you may be able to get your phone replaced if the battery can not be changed.

3. Keeping the Phone at Spots with Higher Temperature

Did you repeatedly keep your phone at spots characterised by higher temperatures, such as outside in the sun or leave it in the car for extended periods?

If yes, then it is possible that the adhesive used loosened up over time and now, the rear glass is coming off. In case you started noticing this issue during sunny weather, this is much likely the cause.

The reason behind this is that the adhesive used to paste the rear back to the phone is heat activated. When heat is applied to the adhesive, it starts coming off.

Just like a huge segment of people in awe of the Samsung and Samsung phones, I purchased a Samsung 21 Ultra three months back. The rear glass started coming off after a period of usage. Let me tell you that I always used the original Samsung charger to replenish the battery status for my Samsung 21 Ultra and the phone has been kept with utmost care. This gives no reason as to why the glass should be coming off, in fact, so soon.

As the rear glass started coming off (probably due to cheap adhesive usage, as in many other similar cases), dust went inside the phone.

Now ideally, a visit to the Samsung Service Centre should do the job and fix the issue, right? However, upon my visit, Samsung marked the device out of warranty by providing a blatantly vague reason that was “the water sticker is red”, even though the sticker is fully white (to this date).

Below I have attached an image that shows the current condition of the phone, as the adhesive loosened, and dust particles settled on the components of the phone: 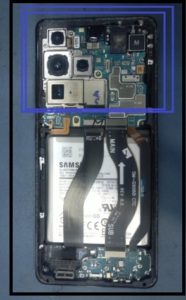 Samsung is a long-standing name in the vertical of electronics. However, with the recent rising complaints about quality and issues such as this (Samsung rear glass coming off), Samsung could lose a huge number of dedicated users, such as I.

When it comes to a phone as expensive as Samsung Ultra 21, or the most recent launches, it is justifiable for the buyer to NOT expect something as absurd as this from Samsung. The rear glass coming off of Samsung devices is a huge implication towards how Samsung has lowered its quality standards.