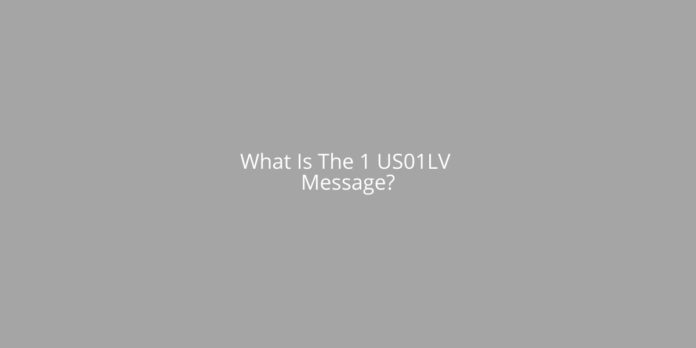 The 1 US01LV message means that the wireless customer you are trying to call is unavailable at the time. It is possible you will receive this message when you are trying toi call a number but you are unable to reach them. Instead, what you get is a message that says 1 US01LV.

Initially, this could be confusing but that is nothing to worry about. All that this seemingly encrypted message means is that the wireless customer you are calling is unavailable.

Do You Recieve 1 US01LV Message For All Carriers?

It is uncertain if you receive this message for all carriers, however, there is one thing for sure, that is, if you are trying to call an AT&T number that is unreachable, you will get the message 1 US01LV.

A number of people calling AT&T numbers (regardless of which carrier they call from) report that they received the error 1 US01LV. This implies that the message can be specific to AT&T only.

Why Are You Receiving The Message 1 US01LV?

You will receive the message 1 US01LV only when you are trying to call a number. The opposite is not possible.

Now that we are clear on that, let us understand what could be the reasons you are receiving the message 1 US01LV when calling a specific number:

There are countless instances in which an individual forgets to charge the device used for communicating, which is another factor that can be attributed to the absence of electricity.

Second, there are times when one decides to step away from the device by turning it off, but then they forget to turn it back on when they return. Sometimes the phones will ‘operate’ themselves, especially when they are in their pockets. This is especially the case when they are ringing. The user’s permission may not always be required for the phone to activate.

There are always going to be dead zones in terms of connection and signal strength, regardless of where a person lives. In this particular scenario, there is nothing that can be done until the receiver relocates to a new location that features improved connectivity and coverage. Therefore, the sender’s capability to make calls may be impacted by connectivity issues.

There are times when you attempt to get in touch with wireless customers whose phone numbers do not support incoming calls.

It is common practice for business or organization numbers to make use of this setting within the phone’s configuration.

A few of the wireless connections can be made completely private so that only outgoing messages can be sent.

What To Do When You Receive The Message 1 US01LV?

After conducting an analysis of some of the factors that have contributed to this issue, the next question that arises is how the issue can be resolved.

In order to investigate and fix the issue, you might want to try the following things:

The most straightforward solution is to make a call later, which is successful in the majority of situations.

Time is the simple and obvious solution to the problem. The lack of adequate network coverage is the cause of an individual’s unavailability more often than any other factor. If this turns out to be the primary reason, the person in question will become immediately available after a brief period of time.

Text messages have a better chance of reaching the person even though phone calls are not going through. In a situation like this one, you should send a text message to the recipient informing them that a search was conducted to find them.

Therefore, it will sound an alarm for the receiver. You also have the option of posting a message on the customer’s social media page.

A number of people whose access to your contact information has been temporarily restricted are included on the list of blocked contacts. It is possible for a person to accidentally or intentionally add another person’s name to the blocked list.

It is possible for a person to accidentally or intentionally add another person’s name to the blocked list. It is absolutely necessary to check whether the wireless customer you are attempting to contact is on the list of contacts that are blocked.

If the number is currently blocked, it should be unblocked before you make another attempt to get in touch with the person.

You are not the issue, as was just made clear in our previous statement. You still need to verify this information. Therefore, make an effort to get in touch with a variety of clients and contacts.

If each of your customer’s reports receiving the same error message, “the wireless customer is not available,” this indicates that you are the source of the issue; consequently, you will need to find another solution.

It is likely that the issue lies with your phone if you are unable to reach any of the people on your contact list and consistently receive the same error message.

In this scenario, it is necessary to restart your device, remove the SIM card, allow some time to pass, and then restart it once more to validate the changes. In the event that nothing changes, we will turn the issue over to the experts.

If you are the source of the problem and the number is not on the list of contacts that have been blocked, you may be having problems with your connectivity and coverage, both of which can be resolved by your service provider.

Get in touch with your service provider or the customer support team for additional information and perspectives on the issue.