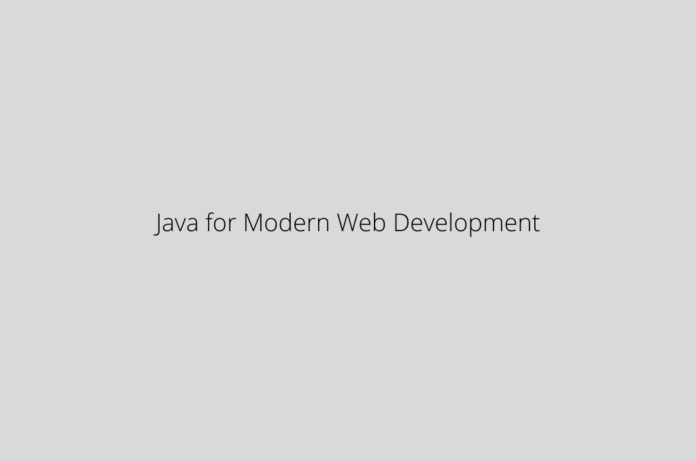 Looking at the numbers, you would notice a very small percentage of web applications are developed using Java, despite the huge popularity that looms right over the programming language.

There is no shortage of developers who would go on to say, “I hate Java for modern web development with passion”.

A very concentrated number of small web applications are built on Java. Why? Because, in most developer’s opinions, Java is an overkill for small applications. When a simple blog that contains a database table (possibly holding the blog entries) can be done in a much simpler way, using the architecture of the JavaEE web application is usually more than what small or simple web applications require.

If you look at it from the perspective of developing a simple web application, having too many options is like having no options at all. With too many options to choose from for one simple thing that you do, with just one option, it is very exhaustive to access an extensive list of options.

For instance, there are more than 38 different web frameworks for Java and about 23 different ORM’s. When you look at other programming languages, the number of options is much more reasonable. If you think having too many options is a benefit, Java might be the language for you, but it surely does lead to a lot of wasted efforts in the developer community.

Besides, when it comes to much larger web applications, such as those of banks and trading companies, using Java as the programming language communicates much better since a number of systems and features need to be clustered in one single application.

Besides, a traditional development process in Java goes like: code -> compile -> deploy while it is in frameworks like (Rails/Django/Grails): run testing server -> code -> change things and see what happens. This slows down the iterative process, and although there are ways to make it faster, it is still much slower than most other languages.

With an over-engineered coding process, a lot of APIs and interfaces could be an impeccable impediment for even the simplest of tasks that you want to perform.

Most Java programs consume comparatively more memory than programs built on other languages such as C++. Since Java itself is a memory manager besides being used for development, this translates to the fact that there is no such requirement of explicit intervention of the programmer.

With other programs that do not have a default garbage collector, such as C++, the programs become very lightweight and fast. Hence, the memory consumption is less in comparison to Java.

Oracle announced that starting from 2019, the usage of Java Standard Edition 8 used for business, commercial, or production purposes, will be charged. For updates, bug fixes, and other features, the business will have to pay by the number of users. Alternatively, the developer can also pay by the number of processors.

Although the current Java version is free for general computing applications, the commercial usage is charged, which means that each company using Java will have to evaluate exactly how much Java they seek to embed into their technology. This means that if the charges are too painful for upgrading, the companies might migrate to other languages to save expenses.

This problem with Java is directly linked to Java being a high-level language with too many options for the developers. As it is for any high-level language, Java, too, has to deal with poor performance owing to the compilation and abstraction level of the VM.

One of Java developer’s nightmares, the bad caching configuration can also lead to excessive memory usage and hence, poor performance.

Far from a native look and feel on the desktop

Creation of Graphics User Interface or GUI for a program requires the usage of different language-specific tools. Let’s just say that when it comes to Java, the options to choose from (tools) are not only limiting but also lacking at some point or the other.

For instance, from amongst the GUI builders, Java programmers can use any of the following builders:

So, where does the problem begin? When you are using SWT, it does use native components, but it is not preferred when going for a complicated user interface. On the other hand, JavaFX has a modern-looking approach and is outstandingly clean but does not have enough maturity in the GUI building field. In gist, when you are choosing a GUI builder for Java-based web applications, it would require extensive research.

Also, when it comes to desktop UI, Java lacks noticeably, which makes any Java-based web application or program look far, and they feel not as rich as it should be on the desktop.

Unless you are running on your own server, finding a shared hosting for Java can be not only difficult but also expensive. Why? Because Java-based web applications consume more memory than other language-based applications do. This is why most shared-hosting providers do not offer hostings for Java sites, and even if they do, they do it at a sky-rocketing price. It makes sense because not only are the providers spending their valuable RAM on your site, but they could be running about 5 php sites at the place of your single Java site.

Apart from these reasons listed above, some other disadvantages of using Java for modern web development are:

Where does Java come into use then?

Although most web developers have migrated from Java to other programming languages for enhanced productivity (and other reasons), Java is still the de-facto language in many technical aspects.

Below we have elucidated on the domains that are still covered by Java effectively, although there are alternatives available:

Java is extensively used as the core programming language for most finance programs, both on the server and the client-side, to build reliable websites. In comparison to other programming languages, Java provides superior security, which is the main reason behind its adoption for processing such sensitive data.

Android applications have succeeded in keeping Java on the forefront as the de facto programming language. Since Android consists of its own APIs and JAVA libraries, Java gives developers a great opportunity for the development of Android-based mobile applications. Although Android uses SDK instead of JDK, the coding is still done in Java.

Yes, you can use code in other languages, but the catch is that you will need a framework to convert into a native application for the Android Programming Interface.

Besides, many of us have heard of Kotlin’s invasive growth. However, Java still beat it, which in turn made a big pool of Java developers into Android programmers.

C++ may be the more preferred language when it comes to developing a point-of-sale or PoS system; Java is not far behind. An increasing number of retailers are continually scoping out Java-based PoS systems as an effective and productive alternative to the aging cash registers.

Since retailers are, well, retailers and not advanced programmers, they prefer using Java as the programming language for their PoS system and not C++. Many are of the view that when their point-of-sale systems are Java-based, the software can run on any hardware or OS. Above all this, it is also easy for them to modify the code as required.

Multiple reports suggest that Java-based PoS systems have decreased the implementation and support costs owing to the platform-independency and a vast talent pool.

Applications such as those of trading and banking require the processing of very sensitive data that is always vulnerable and risked to theft and breach.

In order to be safe and reliable, these applications require a programming language that could provide security with efficiency to create a safe and trusted environment for the users.

This is why a number of trading applications use Java as their programming language. The key advantage is that, in comparison to big corporations that require months for providing a minor software update, Java-based trading applications can implement a change, test it and release it in production in barely any time.

When it comes to building a trading application, Java developers can focus on intuitive object-oriented business logic, unlike in C++.

In C++, you may be stuck debugging some obscure memory that the Core dumped, or may even be managing pointers, while you could be doing something more productive.

When it comes to building large data programs revolving around artificial intelligence and machine learning, Java makes an excellent choice for scaling is a much easier process.

Apart from this, Java also provides access to countless tried-and-tested libraries, monitoring tools, and other tools such as debuggers and much more.

Although a dominant part of the software industry uses C++ for software development, a number of software giants such as Hadoop, Apache Storm, Eclipse, OpenOffice, Atlassian, even Gmail were built on Java.