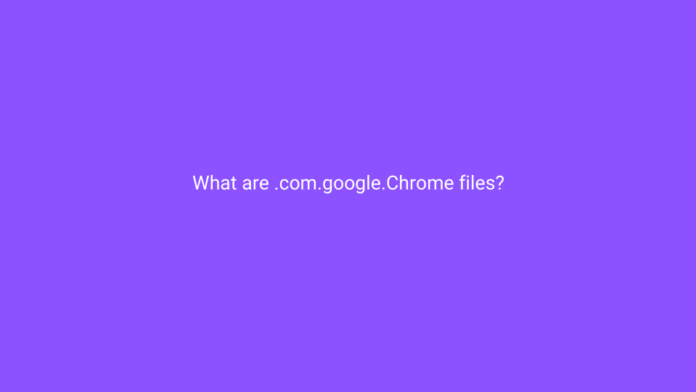 A.com.google.Chrome file is a file created by the internet browser Google Chrome, as evident from the and is used to hold unspecified, mostly junk data and cache on your computer or phone.

The unspecified data contained within the .com.google.Chrome file is junk, in most instances, that serves nothing but to waste the storage space on your device. If you have been thinking of deleting .com.google.Chrome (more on that later), and worried that deletion of this data may cause impediments in the proper functioning of the device – it most probably won’t.

Sometimes.com.google.Chrome files may contain data from downloads, which was originally supposed to be saved as solid files in your Downloads from Chrome, but were unable to be stored since the download process was interrupted (and now the file is most likely broken). Since the file is often broken, it is not likely that this data will be opened.

Thus, all in all, a .com.google.Chrome files are nothing but junk files that can contain cache, data from interrupted or paused downloads, as well as some other unspecified data.

What is the file size of a .com.google.Chrome file?

Depending on what it contains, the file size of a.com.google.Chrome file can vary wildly.

Sometimes, a .com.google.Chrome files can be as small as to be wrapped up in a few kilobytes, while sometimes, a number of users from various forums online complain that these files could expand to take a handful of gigabytes on the device’s storage.

The.com.google.Chrome file may be small in size if it only contains cache and irrelevant data. However, when you have one or more than one (depending on what you were downloading), interrupted downloads stacked up in the .com.google.Chrome file, it can take up a considerable amount of space.

Does the .com.google.Chrome file contain a virus?

If you have recently tried to download something using Chrome and failed to do so, the.com.google.chrome file interrupted downloads, besides some cache and junk. Thus, it is safe to say that on a general note, .com.google.Chrome files do not contain viruses or malware and are therefore not harmful to the device wherein they are stored. Since such ‘harmless’ cache and junk is present on all devices, a .com.google.Chrome file containing the same is likely harmless.

However, it is important to note that the.com.google.Chrome file may not be safe if there is some interrupted downloaded data that was initially harmful.

If you already have a security program installed on your computer or phone, you could use the scan feature to detect if the.com.google.Chrome file poses a threat to your device or not. If the .com.google.Chrome file is located on your computer operating on Windows; you could simply run a scan using the Windows Defender to check if it contains a virus or not.

Is it safe to delete .com.google.Chrome files?

Yes, it is absolutely safe to delete .com.google.Chrome files. Since these files contain nothing but cache, unspecified data, and interrupted downloads, on occasions, you are better off without them. These files do nothing but hog on the device’s resources, eating up space, and if your device has lately been sluggish, you are better off deleting .com.google.Chrome files.

As mentioned before, if you are worried that deleting a .com.googler.Chrome file will hinder the functionality of your device or the Chrome application, in general, it likely won’t. Thus, it is safe and moreover, recommended to delete .com.google.Chrome files.

When should you delete .com.google.Chrome files?

Ideally, we recommend deleting a .com.google.Chrome file when it is taking up a moderate to huge amount of space on your local or external storage and you wish to free up space on your device. Generally, .com.google.Chrome files are small in size, usually in kilobytes, however, if you still don’t want them to hog on your device, you are better off with deleting them; it is absolutely safe to delete them.

What is a Chrome.dll file?

Is a Chrome.dll file harmful?

chrome.dll should not hurt your computer, and is generally a safe file, depending on which application created it.

It is also safe because the DLL files can’t be executed directly, but must be called by another program that has already been executed. However, some DLLs can even use the .exe extension, as they are the same format as EXEs. Most dynamic link libraries end with the.DLL extension, but others can use.OCX,.CPL or.DRV.

DLL files allow programs to be separated into modules, which can be added or deleted, to include or exclude certain features. The program can use less memory if it works this way with DLLs, since it doesn’t need to load everything at the same time. Thus, a DLL file in general does more good than any possible bad.

It is possible that the.dll file is attached to an application that is meant to damage your computer. In that case, a .dll file can be dangerous, including chrome.dll. If you have an antivirus tool that can help identify any issues that may exist, we would recommend that you run a Scan of your system.

Since there will always be an .exe file on your computer for a .dll file, make sure you do both scans together (for the chrome.dll and chrome.exe file), so you don’t need to worry about your computer being corrupted by something bad.

Is it safe to delete a Chrome.dll file?

According to a number of forums and users, deleting a chrome.dll file may cause complications and escalate issues in certain applications. If the chrome.dll file has been created by Mozilla, it may cause the program to stop working or hinder its functionalities.

The reason behind this is that these files contain codes that provide explanation to the operations of the programs they were created for. Since Mozilla can share a chrome.dll file, deleting it can cause unintentional problems.

We recommend that you leave chrome.dll alone if you don’t know if it’s being used by one program or the other program. If you have to remove the file, you should make a copy. You can restore the deleted DLL file from the backup if you’re having a problem with another program that requires you to use it.

When Chrome starts, it will attempt to load a legitimate C:WindowsSystem32win://.dll file. This makes it possible for Chrome to use functions stored in the DLL. When Chrome loads a DLL, Windows checks the same directory that the application is in for any files that are related to it, and if found, loads it from there.

Now, here is how DLL hijacking works: Chrome will load the malicious version of the file instead of the legitimate one, since the Trojan has placed a malicious DLL of the same name in the browser’s folder. This is called DLL Hijacking. The technique is used by the Trojan to put a malicious copy of the win http.dll in the chrome folder so that Chrome loads it instead of the legitimate file.

It’s important to point out that this Trojan often comes bundled with free programs that did not adequately inform you that other software would be installed along with it.

This is why license agreements and installation screens should be scrutinized closely when installing anything off of Chrome. If an installation screen offers you a choice of either Custom or Advanced installation options, it is a good idea to choose these as they will usually reveal what other 3rd party software will also be installed.

It is advised to immediately cancel the installation and not use the free software if the license agreement states that they are going to install a toolbar or other unwanted software. The malicious version of the winhttp.dll does nothing but cause your computer to stay pinned to 100%. This can make your computer incredibly slow, and it could also damage the computer if it’s overheated for an extended period of time.

If your PC has been infected with the Trojan, it is recommended to use a reliable antivirus software to isolate the threat and remove it altogether.