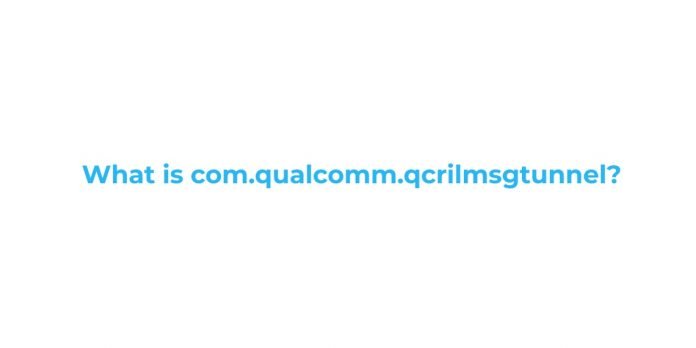 Qualcomm is an American company that makes semiconductors, software, etc., for vehicles, smartphones, laptops, wi-fi, wearables, and other devices. If you are here to know about com.qualcomm.qcrilmsgtunnel, your device must have a Qualcomm chipset, that’s why you see this package.

com.qualcomm.qcrilmsgtunnel is an Android package that is a part of the phone dialler app for devices with a Qualcomm chipset. As mentioned before, its exact functionality is unknown, all we know is, it’s related to Radio Interface Layer (RIL) / Messaging.

Can This Package Cause Any Issue?

com.qualcomm.qcrilmsgtunne can be seen running in the background all the time, but it is not Bloatware. In most devices, it does not create any issues, but if you have an old Android device with a Qualcomm chipset, you may experience battery draining issues if the fast dormancy feature is enabled, but there is no other reported issue caused by this package.

How to Fix Battery Draining Issue Caused by This App?

Most people who find com.qualcomm.qcrilmsgtunne running in the background want to disable/uninstall the app from their device. Technically you can remove this package if your device is rooted, but it is a part of a system app, uninstalling or disabling it will trigger problems with the system dialer app.

How to fix com.qualcomm.qcrilmsgtunnel has stopped?

People have reported getting this error when they reboot their device or tap on the app drawer. The error is pretty annoying since it prevents users from using their device. Below we have mentioned some methods which usually fix this issue.

If a third party or system app starts misbehaving, force stopping it will fix it most of the time. Keep in mind that sometimes force stopping works as a temporary solution, as soon as the app starts running again, it may start triggering the same error.

Note: Force stopping the app is all you have to do; clearing data is not required since the app will regenerate all the data once it starts running again.

2.Restart or Factory Reset Your Device

If you see com.qualcomm.qcrilmsgtunnel has stopped when you try to open the dialer app, download the Phone app by Google and start using it as your default app. The app has spam protection, caller-identification, and more features. There are several dialer apps available on Google Play Store, but this one is the best, and it’s free too. You can also try other apps, but most of them are paid, and the free versions usually have display ads.

Qualcomm chips are used in millions of mobile devices manufactured by top companies like Samsung, LG, Google, OnePlus, etc. Their chips are known for fast processing speed, but in 2016 Qualcomm made headlines because of their security flaw, and again in 2020 researchers found lines of code vulnerabilities in digital signal processors (DSP) of Qualcomm’s SoCs.

Security researchers from FireEye found a vulnerability called CVE-2016-2060, which was located in “Netd,” a daemon that is part of the Android Open Source Project (AOSP). The vulnerability had put users’ text messages and call history at risk of theft. The flaw was later patched by Qualcomm, but many old devices never received the fix because they were no longer supported by their manufacturer.

Even though mobile vendors and chip manufacturers like Qualcomm immediately acknowledge these vulnerabilities, attackers still end up exploiting a lot of devices because it can be hard to fix all the devices immediately.

No, com.qualcomm.qcrilmsgtunnel is not a virus; it is a part of the dialer app on Android mobiles.

What is qualcomm atfwd?

atfwd service allows users to use the screen mirroring feature.