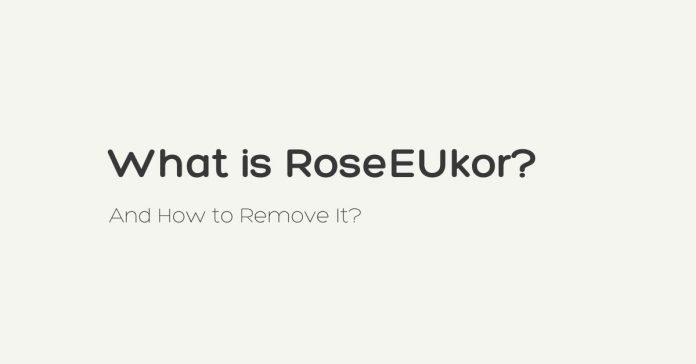 If you are here, you probably noticed an app called RoseEUkor.apk on your phone and now you have questions about it. In this article, we have explained what this app is and have answered if it’s safe to remove it or not. We have also mentioned all the issues it usually causes and how you can avoid them.

Make sure before you read what RoseEUkor is, you understand what Bloatwares are and why Android manufacturers install them on their devices.

A Bloatware is an application that runs in the background and uses RAM, CPU, and mobile data for no reason. Manufacturers like Samsung are known for installing these Bloatwares as system apps, although their new devices do not come with multiple Bloatwares like they used to, they still install random apps with new software updates. There is no official statement about why they do it, but most people think they get affiliate commission from these app developers, which can be true.

RoseEUkor is an Android font app found in Samsung devices. It is not Adware or some virus; however, it can cause issues in some devices, so most people consider it a Bloatware. There are a few more apps: CoolEUkor and ChocoEUkor. All of these are preloaded font apps, and as mentioned before there is nothing to worry about as long as the app is not consuming too much CPU and RAM. Below we have mentioned more details related to the issues the app can cause.

New generation Android devices come with powerful CPUs and offer more RAM and storage capacity than they used to do. They can handle multiple Bloatware apps without any impact on their performance, but old Android devices used to have less powerful CPUs and very low RAM and storage capacity. If an app like RoseEUkor uses high CPU/RAM constantly on a less powerful device, it may impact its performance and usually, it is noticeable.

Mobile Data Consumption: Many people have complained about RoseEUkor using hundreds of MBs of their mobile data. This is one of the biggest issues for those who use cellular data more instead of unlimited Wi-Fi.

Constant CPU Consumption: The app keeps running in the background even when the device is not being used, the effect of keeping the CPU active may result in slightly low battery backup. Some people claim that the app drains the battery, but it slightly affects it and does not drain the battery.

Unnecessary RAM Usage: Sometimes RoseEUkor uses more RAM than it should, and a device with a low RAM may start hanging. This is not an issue with powerful devices, but old Android devices may not be able to handle apps like these.

Storage Usage:  Even though the app uses very little space, it can be an issue for people who have limited storage space.

Is It Safe to Remove RoseEUkor?

Yes, RosEUkor is just a font app that can be uninstalled if it’s causing issues for you.

Usually uninstalling a built-in app is not possible unless you root your Android device first. But, there is still a way you can get rid of RosEUkor without rooting your device. We recommend you try the 1st method mentioned below and if it does not work, you can try the third method if you want.

Sometimes built-in apps can’t be uninstalled without rooting but disabling them will stop all the background activity, and the app will not use RAM and mobile data.

Step 5.) Find and tap on RosEUkor.

Step 6.) Tap on the Disable button.

Root without a PC

Root with a PC

Some devices can’t be rooted by using one tap root Android apps; in that case, you have to root your device using a PC.

Final Steps to Remove the App