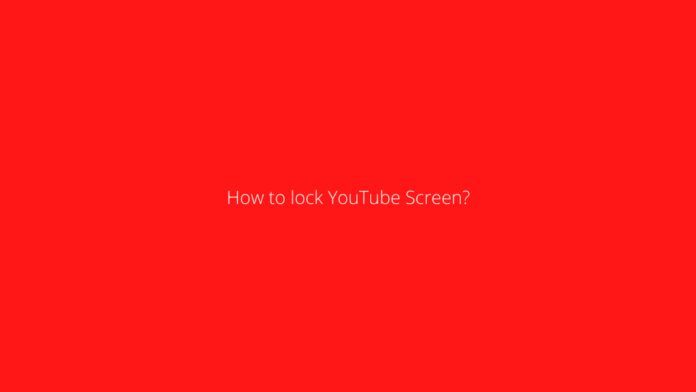 It can be annoying to watch YouTube videos and not be able to lock the screen since YouTube does not provide a ‘lock’ option while streaming videos. This can work to your disadvantage every time you accidentally touch the screen and the video pauses or forwards or rewinds (just some possibilities).

So, how do you lock YouTube Screen? Below we have enlisted multiple ways you can lock the screen on YouTube on both Android as well as iOS devices.

Enter the YouTube URL in your Chrome browser to get to the video-sharing site.

On the iPhone, the ‘Guided Access’ feature may be activated right from the home screen, which is convenient.

Using this function, the youngsters are prevented from using any other apps and are instead restricted to using only YouTube. The following are the actions to take in order to enable Screen Pinning:

You can use browsers to play YouTube videos on both your Android as well as iOS devices while also having the functionality to lock screen.

This fix for the Android browser is straightforward. If you’re using an Android device, instead of utilizing the YouTube application, open a YouTube video via the Mozilla Firefox browser instead. It’s important to write the URL correctly so that your Android smartphone doesn’t automatically redirect you to the YouTube application.

Mozilla’s Firefox browser application, on the other hand, is a free download that you can use whenever you’d like.

The solution for the Google Chrome Browser on Android is quite similar to the workaround for the Mozilla Firefox Browser. Watch the video in question by opening the Chrome Browser, which should be pre-installed on your Android smartphone.

Despite the fact that you have locked your phone, the audio should continue to play. However, because of Google’s integration, you can control the stop and play capabilities from your lock screen, which is a nice, though unintentional, touch.

You must first ensure that Google Chrome is running in Desktop Mode on your Android smartphone if you wish to accomplish this task.

The terrible thing is that if you are using the browser in desktop mode, you will not be able to adjust the playback options through the lock screen. Even still, it’s preferable not to have the ability to lock your screen at all.

Play Through the Safari Browser On iOS

While the last two recommendations were directed at Android users, this one is intended for iPhone and iPad owners who enjoy watching YouTube videos.

Users of the iOS operating system should be able to execute the same task using the Mozilla Firefox web browser. In addition, the free Firefox browser should allow you to control the playback of the video.

How to Play YouTube Music in the Background with Screen Off?

It doesn’t matter if you touch the home button and exit out of the YouTube app; the audio will stop. This is a concern because it consumes a lot of battery power and raises the temperature of the device. It’s also a nightmare to deal with in the middle of the night.

Let’s have a look at what we can do on iPhone and Android to play YouTube music in the background when the screen is off (without using YouTube Premium).

Instead of allowing you to listen to music, the YouTube app was made to allow you to watch videos. It’s no surprise that YouTube is the world’s most popular and largest video hosting service.

It’s easy, but it works to listen to YouTube in the background on Android. Fire up Firefox, navigate to YouTube, and begin watching your preferred video. A redirect to the mobile app may appear at this point; do not use it.

To launch YouTube in a browser, go to youtube.com. The YouTube website will automatically redirect to m.youtube.com if you access it from a mobile device (the mobile website). YouTube’s desktop site will now only load if we compel it to do so manually.

Select the Desktop site from the options. Play a YouTube video, and then turn off your computer screen. You’ll be able to hear the audio as long as you keep your ears open.

To resume playback if the audio has stopped, simply use the volume up/down buttons on your device. In this stage, you’ll have to get your feet wet. Our readers have informed us that the method does not work on all browsers.

Instead of using Firefox, try Brave or Dolphin and manually type youtube.com into the browser URL box. There are a few of these apps that you can use to listen to YouTube audio, depending on the type of your smartphone.

Pull down the notification drawer and press play from the audio controls there if the audio playing is still broken. It must be clearly apparent.

Note that some browsers, such as Brave, have a power-saving option that must be disabled in order to continue listening to YouTube audio when the screen is off.

There are some issues with background YouTube listening on iPhone, but it is worth a try. For this solution, we must rely on iOS browsers rather than YouTube apps. Incredibly, Safari appears to have the capability.

When using the iPhone’s built-in YouTube app, most of the processes will be the same. Play your favorite video on YouTube by opening Safari and requesting the desktop version.

If you are running iOS 10 or earlier, the Safari browser hack will work. If that isn’t the case, you may want to try out Opera Mini. The steps are the same, and it works great.

In order to turn on the light again, you must press the lock button once. Don’t open your phone’s security. Playback controls should be visible on your screen now that the music has stopped playing.

The audio should start playing as soon as you touch the play button. Swipe up from the bottom of the screen to open the Control Center manually if you don’t see the music controls. The music widget should be there if you’ve activated it in the settings.

YouTube offers a sophisticated API that is utilized by a wide range of applications to display its vast and immersive video collection. One such app is NewPipe, which may be found on F-Droid rather than the Google Play Store.

YouTube music can be played in the background even while the screen is off. Yes, you can use the app for free. Let’s have a look at how things go.

In Settings-Developer Options, you must allow the installation of apps from unknown sources. You’re now ready to listen to your favorite videos on your phone.

The app will take up the entire screen when you start watching the video. To see more options, simply press and hold the screen for a second time. Once you’ve selected Headphones, you’re all set. With this new feature, you can now lock your phone and have the music play even if the screen goes dark.

The software does not require headphones, but they are an option. The speaker is in perfect working order. On the lock screen, you may also control the music playback.