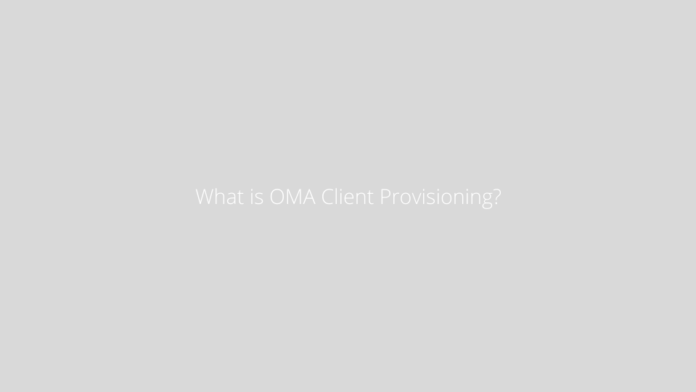 What is OMA Client Provisioning?

It is a standard mode of operation that allows mobile carriers to provide network configurations to consumers in the form of customized SMS messages. OMA Client Provisioning is an acronym for Open Mobile Alliance Client Provisioning.

It is a system-level application that serves as an interface between your phone and your wireless carrier network. When we talk about OMA Client ‘Provisioning,’ we’re referring to the process of sending an OMA CP or OMA Client Provisioning message to the device of the mobile operator’s customer, also known as provisioning.

OMA Client Provisioning, the industry standard for managing phone fleets, is widely used by large corporations that manage their own phone fleets. Large organizations typically utilize the standard to distribute company-wide email or web proxy settings to all devices used by their employees, allowing them to access internal email accounts or intranet portals that are only available to other employees of the organization.

What is a fake OMA Client Provisioning Message?

When mobile providers send internet settings to Android phones using a specific form of an SMS message, attackers can take advantage of this to execute convincing phishing attacks that cause users’ internet traffic to be hijacked.

In the opinion of researchers from Check Point Software Technologies, some phone manufacturers’ implementations of the Open Mobile Alliance Client Provisioning (OMA CP) standard allow anyone to send special provisioning messages to other mobile users with a $10 GSM modem and commercially available software, according to the researchers.

It is possible to launch very convincing phishing attacks using this method because most users will assume the message came from their service provider and will accept to apply the settings. The configuration can include an internet proxy controlled by the attackers, which forces all internet traffic generated by the user to be routed through the proxy instead of the attackers’ server.

Traffic spying and other man-in-the-middle attacks would be possible as a result of this.

Because the Android codebase does not include the technology to handle OMA CP messages, phone manufacturers have added this functionality to their devices’ Android firmware on their own initiative.

In order to account for this, there may be changes in how these messages are handled by devices from different manufacturers, including differences in the user interface.

In the event that you receive an OMA Client Provisioning Message, what should you do?

Users should not accept and install internet settings on the client side since they will not be able to verify whether or not the message came from their service provider. These settings can be configured manually in Android, and the necessary configurations can be obtained from your service provider or network provider.

In mobile networks, operators can prevent the delivery of OMA CP messages that do not originate from their own equipment from reaching the network.

To protect themselves against rogue OMA CP provisioning messages, the most straightforward measure that consumers may take is to decline all communications by default.

Once a mobile network feature, such as MMS services or mobile data, ceases to function, consumers can call their telecommunications companies’ customer service departments and request that the provisioning messages be re-sent again, certain that they are valid.

How to delete an OMA Client Provisioning Message?

Follow the steps below to remove OMA Client Provisioning Message:

How to disable Provisioning Message by CP Client?

Have you been receiving a flurry of ‘Provisioning Messages’ from CP Client in the notification tray on your Nokia smartphone lately? No matter how many times you swipe it away from the notification tray, it will appear again after a short period of time. There is no response when you tap on it.

What exactly is the CP Client?

It is essentially an over-the-air (or OTA) provisioning system for the client. Using this device management technology authorized third parties (such as businesses, network operators, and other service providers) can configure and administer devices from a distance. This comprises the provisioning of network settings, the remotely upgrading of the device, and other functions.

Provisioning Messages by CP Client are not a virus, but rather a system notification — often in the form of an SMS including many phone settings, many of which are carrier-specific, such as settings for MMS and the internet.

When using OTA, a central place can transmit an update to all users, who are unable to deny, defeat, or alter that update. Additionally, when using OTA, updates are applied to everyone on the channel immediately after they are sent.

Although a user could refuse OTA, the ‘channel management’ could also ‘throw them off the channel immediately if they did so.

Below we have enlisted two methods to disable CP Client Provisioning Message:

To turn off Provisioning Messages by CP Client on your Nokia smartphone, follow the instructions outlined in the following section. If you receive similar messages on any other device, you can also attempt the procedures outlined below to resolve the issue.

When you complete this procedure, the provisioning messages will no longer appear in the notification tray of your smartphone.

The CP Client, as previously discussed in this article, frequently transports carrier-related system messages. So, if the approach described above does not work for you, you can try going to the Apps & notifications section of your phone’s settings and disabling the carrier service’s app (in our instance, it’s called Vodafone Services). Then you can turn off the carrier service’s notifications from there.

Workaround to prevent CP Client notifications from becoming a nuisance.

As a temporary workaround if the two techniques described above to stop provisioning messages from CP Client do not work for you, and your telecom service provider is unable to assist you, there is an option to customize the notifications.

This will not prevent CP Client notifications from being received, but it will prevent them from bugging you.