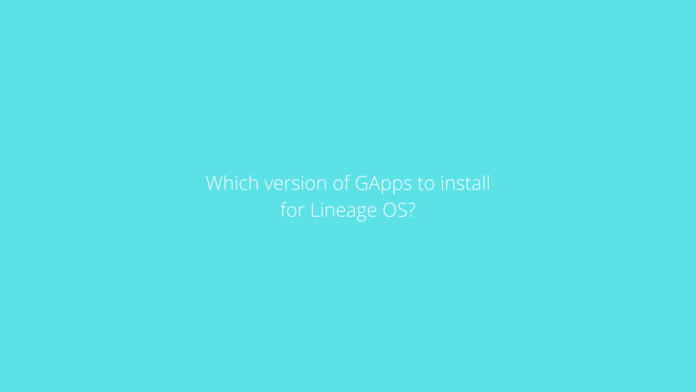 With so many variants of GApps available online, a simple task of choosing the right version of GApps after installing LineageOSon your phone, can be strenuous and exhausting.

If you are not sure about which is the right version of GApps for your device after flashing Lineage onto it, we have got you covered in this article.

GApps, as evident from their names, are proprietary Google-branded applications that often come pre-installed with most brands of android devices. The most common GApps are Play Store, Gmail, Google Maps, Hangout, etc. GApps is an unofficial package and is distributed in several forums such as XDA developers, as well as other similar places, containing Google applications and frameworks.

Every package of GApps, or more appropriately, every version of GApps is different from the other and contains different Google frameworks and applications. The primary reason behind creating several different versions of GApps is to ensure that the users have the privilege to install only those GApps that they truly want on their device. This also translates to GApps being more productive and less of a bloatware since you get to choose what you want to keep.

GApps, unlike the common hoax, are independent of LineageOS, and have been packaged by developers for the convenience of users flashing custom ROMs on their android devices. Since a majority of custom ROMs, including LineageOS, do not come with pre-installed GApps, unlike stock ROM, you can flash them on your device to take full advantage of the Android ecosystem.

If you wish to install GApps on your device after flashing a custom ROM, it is strongly recommended to do so right after installing LineageOS.

But, why do you need to flash GApps on a custom ROM?

As mentioned before, Google has restricted CyanogenMod as well as other custom ROM makers from including GApps as a part of the ROM package. Since these are ‘system apps’ and not apps that are uninstallable, you will need to choose and flash the right version of GApps on your device that is running on a custom ROM.

If you try to install GApps (instead of flashing it during recovery) on your device after flashing a custom ROM, it would result in  “crashed” OR “not responding” errors. Why so? Because GApps provide the basic Google frameworks which necessitate deep system-level access, which can only be achieved by flashing. If not flashed, you would not be able to achieve proper integration of GApps on your android ecosystem.

Which GApps are important and which ones are optional?

There is a solid reason why GApps comes in several different versions, and that is because most users do not require every google application on their device. If you install all the GApps on your device, without the absolute necessity to do so, the GApps package will act more or less like a bloatware.

This is why it is important to understand which GApps are important and which ones you can leave out of your device. Although the choice is personal to everyone, on a general note, if you are installing GApps for LineageOS on your android device, we believe these applications are a must inclusion:

You may be of the view that you do not need some of these Google applications, however, if you will be running on the Google ecosystem, and you are devoid of any of these applications, you are most likely to be unable to use your android device to its full functionality.

There are various apps developed by Google that you may not require on your rooted phone (or even an unrooted phone) running on custom ROM. Although the list of such apps is extensive, the most common optional GApps would be:

Which version of GApps to install for Lineage?

From the minimal Pico to the holistic Stock, there are so many versions of GApps available on the internet that it can be overwhelming to choose the right one for your device.

Generally, the most important deciding factor when it comes to choosing the right version of GApps for your device running on LineageOS is the system capacity of your device. This also roughly translates to knowing the architecture and processor of your phone (more on that covered below).

Basically, the capacity of your /system folder (not the generic Storage capacity) makes for an important part of deciding which version of GApps is best suited for your device.

Apart from this, knowing the Android OS your device is running on and lastly analysing the number of GApps, as well what GApps you need can be great parameters to judge which GApps version you require.

How are GApp versions categorized?

When you begin to choose a GApp version for your device, you will be met with three categories that enlist different options under them. These are:

Platform is typically the category which prompts you to choose a processor type for which you need to download GApp. This, in our opinion, is the most important category, and you must select the platform very carefully, having full understanding of the processor your phone runs on.

The options available under ‘Platform’ for GApp are:

Android 11 is only available in GApp versions nano and pico. For most android versions, the GApps require a patched view ROM for proper WebView support.

Which version (variant) of GApps should you choose?

What’s the ‘right’ variant of GApps for you is a subjective answer. To help you out with making your choice of varant that will best suit your ‘Googleyish’ needs, below we have elucidated on what the different variants or versions of GApps really mean and what Google applications they contain.

To download the right version of GApps for Lineage on your android device, you need to know which processor you have.

Since you can not exactly download GApps from Google Play Store, it is important to understand your CPU architecture and device’s processor to proceed with choosing a GApps package that most suits your Android needs.

There are three main processor architectures used in the operating system of the phone: x86, x64, and ARM. Out of these three,ARM is the most common because it is properly designed for optimization of battery consumption. The standard for newer devices now is based on the evolution of the original ARM architecture to ARM64 that supports 64 bit processing for more powerful computing. x86 is the least common of the three because it is not as battery-friendly as either of the other two types.

There are lots of apps that can give you information about the hardware configuration of nny device, whether it is a phone or a computer.

What happens if you don’t install GApps after flashing Lineage?

It is certainly not the end of the world if you do not install GApps on your device after flashing Lineage or any other custom ROM on your android device. It is not mandatory to install GApps on your android device after flashing custom ROM onto it, however, a large segment of users do it for the accessibility of Google Play Store and a few other applications that depend on Google Play Services.

You do need to be worried about not being able to carry out the basic operations such as calling, since calls, SMS messages, internet, WiFi, and Bluetooth can work smoothly without the installation of GApps.

The most that happens if you do not install GApps after flashing LineageOS onto your device is that you could not get access to Google applications and its framework, unlike when you have stock ROM on your device. This means you won’t be able to download applications from Google Play Store, or be able to log into your Google accounts for the purpose of syncing data, mails, contacts, etc.

One workaround for downloading applications on your device running on Lineage without GApps is to sideload them using third party application downloaders, such as APKMirror (if you are worried whether APKMirror is safe or not, read our detailed article about it here).

We understand if you do not want most of the junk Google can provide you with when you are running on stock ROM. However, to make full use of your custom ROM, it is ideal to download and install one of the most basic versions of GApps, possibly Pico, if you do not want anything to do with Google bloatware.

How to delete a GApp?

If you do not require a certain GApp on your android device and want to uninstall it, it is pretty easy to do so. Use a good third-party file explorer, such as ES File Explorer (only works if root is enabled on your device) and then navigate to /system/app or a file equivalent to it in the ES File Explorer and delete the same.

Note: You might run into issues later, thus, it is advisable to keep a backup of your ROM before you delete any GApps from your device.

Have you ever wondered why custom ROMs such as CyanogenMOD and LineageOS are shipped without GApps? Why do these not come pre-installed with Google applications and save you the trouble of manually flashing GApps? For starters, Google restricted a number of custom ROM builders from including GApps in their ROM.

Secondly, whenever any part of your GApp package updates (and Google applications update on a very frequent basis), it would be very hectic and tedious for the developers of your custom ROM to create new versions of the existing ROM.

Since custom ROMs are restricted from using GApps, Google Play Certification now only allows certified devices to support Google Play and the basic Google framework. Do not fret, though, since you can work your way around this by registering your device’s GSF ID or Google Services Framework to be able to use and run Google applications.

How to Register Your Device for GApp?

To register your device, in order to get Google applications running on your device using custom ROM, navigate to the Google’s device registration page for information and instructions on pulling your GFS ID using an ADB command. Once you have pulled your GFS ID using an ADB command, you will be able to register the device to your Google account and next, you can continue using GApps as normal, on your custom ROM.

It is worth noting that your GFS ID changes every time you factory reset your android device. On top of this, Google limits the number or registered IDs per account to a hundred. If you are a hardcore custom ROM user, it is highly probable that you will hit the 100-mark sooner than others will. The catch is that the apps are only blocked if the system image build is after March 16, 2018 (the time period from when Google started blocking access of applications by unregistered devices), so, if your device’s image build date is older than that, you should be fine, and your device will not be affected.