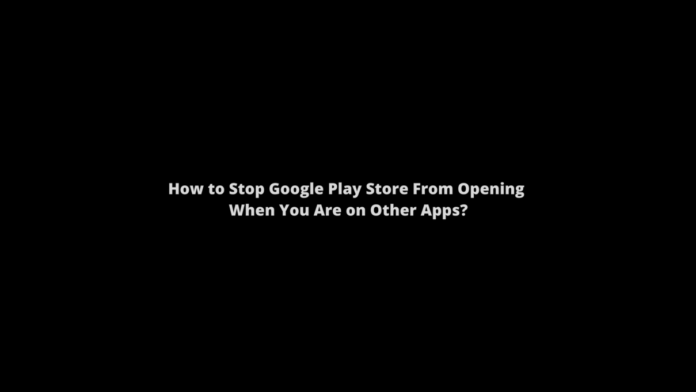 Before you all but start blaming Google Play Store for the incessant popping up while you are using other applications, make sure it is really Google Play Store’s fault that’s causing the issue.

In the specifics of this article, we shall look into multiple solutions to stop Google Play Store from opening when you are on other apps.

Pause! Before all that, let us try understanding why the error occurs in the first place.

Why does Google Play keep opening while you’re on other apps?

Most of the time, it is not a glitch or error on Google Play Store’s end that is causing it to open up without your specific instructions. The problem could be rooted in three possible causes:

Applications running a lot of ads

Some applications top the general quota of ads, and if you are using an application that has advertisements (that redirect to Google Play Store) crammed up almost everywhere on the screen, you already know who/what the culprit is.

These applications embed ads in almost every empty space, and when you click on these ads knowingly or unknowingly (mostly unknowingly), you are redirected to Google Play Store.

This redirection prompts you to download the certain application that the ad was for (the ad you clicked on).

Application infected by some malware

If you have recently downloaded an application from some untrusted developer or source, either on Google Play Store (before the timespan that Google recognises and bans the app) or from the Internet, there are moderate chances that the app could be infected with malware causing the error.

If Google Play Store keeps opening mostly after the installation of a certain application, it is high time you run a malware check, especially if the application looks ‘kinda sus’.

Although it is highly unlikely that the problem lies in the Google Play Store, we can not completely obliterate the possibility, more so if you have already ruled out the other two aforementioned reasons.

If it is a problem on Google Play Store’s end, it will easily be recognisable since you will not be the only one facing it. If it is recurring on other phones and devices, you can let Google Play Store take the fall for the unnecessary trouble it’s causing you.

How to fix (stop) Google Play Store from opening when you are on other apps?

Below we have discussed 7 possible solutions that can help you stop Google Play Store from opening when you are on other apps:

1.Uninstall the application redirecting you to Play Store

Remember installing the application with dodgy ad scripts written all over it, waiting for you to hit the ‘click’? Yes, uninstall it.

If the problem, as mentioned before, occurs only on select third-party applications, and they apparently have way too many ads on them, it is high time you uninstall the application.

If you do not wish to uninstall the application that is redirecting you to the Play Store using click baits, try to identify these click baits. As long as you can identify and skip clicking on these redirects that open the Play Store, you will be fine.

What about Google Chrome or some other search engine?

On a usual note, you shall be able to recognise these spammy sites (most of them have a long loading time), and thus, avoiding accessing them altogether can help fix the problem.

Of course, it is not easy to find malware on your device, more so because most of these are designed to cause a nuisance with a silent trail.

If you have recently installed an application, package, or anything that was not vetted by a reliable source, it could be affected with malware. It could be the malware causing the Play Store to open when you are on other apps.

At best, running a malware check and removing the malware should do the job. You can do this using both a ‘trusted’ third-party application or an in-built application used to protect against malware and other security threats.

A few reliable third-party antivirus applications for android devices are:

Open up different applications to check if Google Play Store is opening up after being forcibly stopped.

This is actually a two-step method, wherein we shall first attempt to clear cache, and if it does not work, clear your app data from Google Play Store. Make sure your Google Play Store is up-to-date first.

Browse your device for a while to check if Google Play Store opens while using another app. If it does, move to the next step:

Note that this will clear your data, including your sign-in information, so when you reopen Google Play Store, you will have to feed in your data again.

5.Try signing out and into the Play Store.

This will remove your Google Account from your device and then re-add it.

Signing out of Play Store: