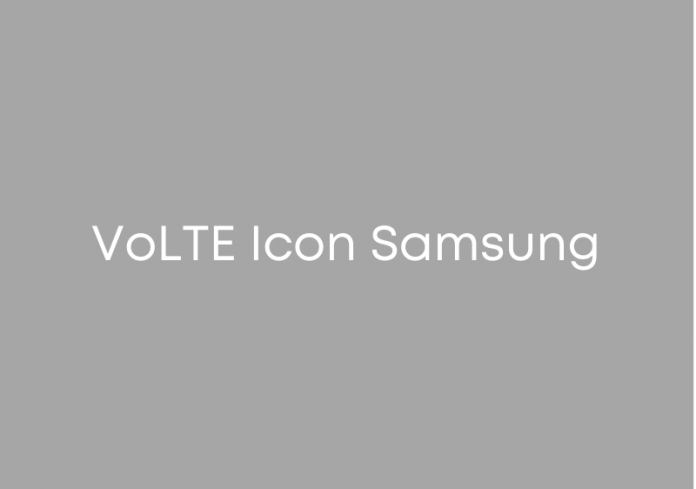 Thousands of people monthly search about VoLTE icon to figure out why their phone displays it and how they can remove it. If you are also here for a similar reason, you have come to the right place. In this article, we have defined VoLTE and have covered everything else that you need to know.

Voice over Long-Term Evolution (VoLTE) is a wireless communication standard for mobile phones and Internet of things (IoT) devices. VoLTE is faster than the older 2G/3G technology in terms of internet speed and call set-up time. VoLTE uses internet data plan to send SMS and make phone calls and, of course, to browse the web too. There are several advantages of VoLTE that we have explained later in this article; make sure you read them.

The VoLTE icon can be seen in the status bar of Samsung’s S series and Note series devices; the icon indicates VoLTE is enabled and nothing else.

Can You Remove VoLTE Icon?

There Is A Workaround

The icon can’t be removed without turning off the VoLTE, but you can use an Android app like Material Status Bar; it lets you customize your status bar, and just enabling it will remove the VoLTE icon. Keep in mind you will have to allow multiple permission to let this app customize your status bar. We tested the app to check how good it is and found it to be not that useful, but if you really want to get rid of the icon, it’s good for you.

Read: How to Customize Status Bar on Android Phone

Note: Some people think downloading a third-party launcher will remove the icon since launchers change the overall UI of your device. But it’s not true, launchers do change the UI, but they don’t change the status bar that shows the VoLTE icon.

Should You keep VoLTE on or off?

VoLTE is voice calls over a 4G LTE network instead of 2G or 3G; it should be enabled if your phone supports it because it’s faster, saves battery, and offers more benefits than the old 2G and 3G network. Some cellulars companies like Sprint are still offering services for devices that do not use VoLTE but soon, the network will be shut down.

How to Enable/Disable VoLTE?

Note: The steps can be different depending upon your device.

How to Check if Your Phone Has VoLTE?

Now check if there is an option called VoLTE calls; if yes, then your phone has VoLTE; if not, then it doesn’t.

What Are the Benefits Of VoLTE?

If you have a phone with a video call option in its dialer app, you can make video calls using VoLTE and chat with other people who also have VoLTE and a device with an option of video calling. Even though the voice quality may not be as good as offered by VoIP apps like Google Duo, Skype, Imo, etc., it’s still a good option because you don’t have to download extra apps just for video calling and VoLTE video calls also use less battery of your device in comparison to VoIP calling apps.

Unlike older technology, VoLTE does not switch 4G to 3G when making calls; it means your device will not constantly search for the network and eventually save battery.

Battery consumption depends on multiple factors, so if you are using VoLTE in an area with poor network coverage, your device will consume more battery than it normally does because the device keeps searching for the network.