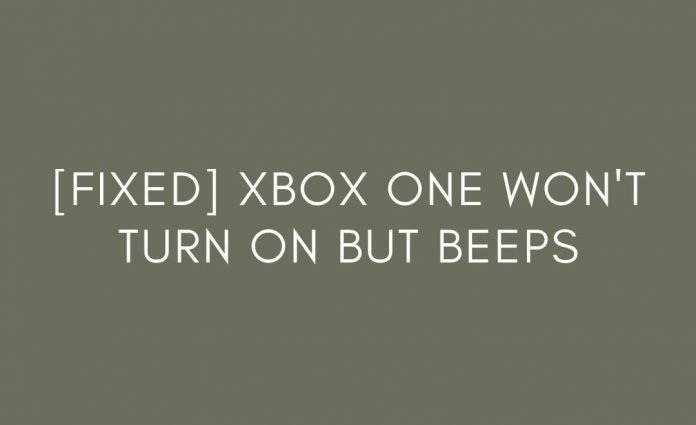 Xbox One booting issues are pretty common, and some can be fixed quickly by following a few simple steps. The “Xbox One won’t turn on, but Beeps” issue can also be fixed if there is no hardware fault. Make sure you read this guide till the end and try all the solutions we have included.

How to Fix “Xbox One Won’t Turn on but Beeps”

To fix this booting issue, you may have to try multiple solutions before you try the one that fixes the problem. We have included all the tested solutions that usually work in this case. If none of these solutions works for you, we have also mentioned what could be the reason your Xbox One is not turning on even after trying everything. By reading all the reasons, you may find out what’s causing the issue and fix it.

This solution works in most cases. Press the eject button 10-15 times in a row, and the Xbox one may boot normally. If it does not work, you can try doing it 1-2 times more, and it may work.

Solution 2: Insert a Disc in the Disc Drive of the Xbox One

This solution works if you don’t have any disc on the disc drive of the console. When the console is off, insert a small part of the disc inside the drive, press the power button, and wait for the beep. Once you hear the beep, try to push the disc inside gently, and the console will accept the disk, and it may turn on.

Power cycling resets and puts the console into standby mode. When the Xbox is off, hold the Xbox button for 10 seconds, the power brick will start flashing orange light, then white for a second, and then orange again. You can also power cycle your Xbox and then reset the power supply. (This will not remove your apps and games.)

Solution 5: Remove the USB Devices and the External HDD

Solution 6: Use a Different Power Outlet

If you are using a power strip, connect the console with a separate power outlet and power on the Xbox. A power strip connected with multiple appliances may fail to provide the initial burst of required power.

This one is a bit complicated, and you might not be able to do it correctly in one try. Please read the detailed steps below and watch the attached video to figure out how it’s done.

Step 2: After 10 seconds, release the eject button and wait for 15 seconds.

Step 3: After 15 seconds, release all the buttons.

Why Does Your Xbox One Beeps but Won’t Turn on?

If you have tried all the solutions and none of them worked, you have to get your console fixed by an expert. Below we have mentioned some common hardware faults that usually prevent the console from booting up.

Console overheating can also create booting issues. If your console is overheating, you don’t have to follow any steps, just disconnect the console from the outlet and wait for 20-30 minutes before turning it on.

(Make sure the fans are clean and the vents should not be clogged.)

Before you contact customer support, you can try changing the Power brick and cable to see if it fixes the issues.

The liquid can damage the motherboard of the Xbox and prevent it from booting up. In some cases, the Xbox turns on, but it turns off after a few seconds. You can get it fixed by an authorized expert.

Xbox One has an internal PSU that sometimes fails to provide the required burst of power on the initial boot. You can get it fixed or replaced, but the replacement price can be higher than a used Xbox One.

Xbox One turns on then off

A. Xbox One turning on then off is also a common issue. It can be fixed by some of the solutions we have mentioned here, but there are other solutions you can try like using a blow dryer. We have covered everything about this issue in this article:  Xbox One Turns on Then off

Xbox One shuts down suddenly

A. One of the most common reasons of this issue is “Overheating.” As mentioned before, wait for some time before you boot up the Xbox and clean the fans and clogged vents for proper ventilation. If it still does not work, remove the external HDD and try to turn on the console.

Xbox One error something happened on our end

A.This issue can be caused by an incomplete software update. Factory reset the console, and the Xbox will download the complete update.

Xbox One shuts off when connecting to WiFi

A. This can be fixed by changing the encryption protocol of the WiFi, follow the steps below:

Do Xbox Series X Controllers Work on Xbox One?

How to Use an Xbox 360 Controller on Xbox One

Best Xbox One Controllers with Paddles

How to Play Xbox One on Laptop with HDMI or Wirelessly