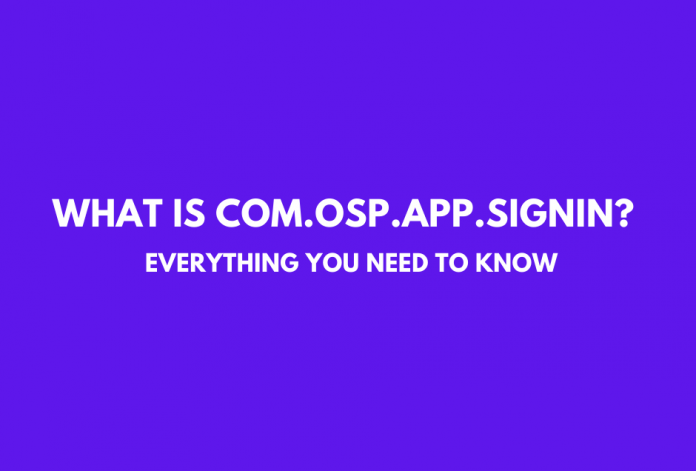 Many people who see com.osp.app.signin under the used apps of Google activity or somewhere else, start questioning what this app is and why is it running on its own. This article explains everything you need to know, including how you can fix “Unfortunately com.osp.app.signin has stopped” prompt.

com.osp.app.signin is an Android package file found on Samsung devices, its exact functionality is unknown, but we know it’s a part of the Samsung account app and related to account sign in. Samsung account is a membership service that allows users to use multiple Samsung services on devices like smartphones, tablets, TVs etc. Package files like these have created a lot of confusion among people; some think they are secret apps used for cheating, some think they are Bloatware and Spyware.

But we can assure you that this app is completely safe and it’s important too. If you are worried about com.osp.app.signin running in the background, we want to let you know that it hardly uses device resources, and it does not affect the battery backup.

“Unfortunately com.osp.app.signin has stopped” prompt after booting up tablet or mobile is a common issue on old Android versions. It shows two options: Force close and Report, most of the time none of them works. Restarting the Wi-Fi connection may fix the prompt issue for some time, but it’s better to force stop the app and clear cache. Follow the steps mentioned below:

Technically you can remove almost all system apps if your device is rooted. But com.osp.app.signin is a part of the Samsung account app, if you remove it, the Samsung account app will not be usable, and it may start malfunctioning. We recommend leaving it alone and don’t worry about its background activity as mentioned before it does not impact anything.

If you still don’t want this app to run in the background, you can freeze it to make it inactive instead of uninstalling it. You need root access to freeze a system app; if your device is already rooted, you can follow the steps mentioned below and if you want to root your device, scroll down to the next section where we have explained how you can do that.

Step 3: Search and tap on “com.osp.app.signin.”

(If you have Superuser installed, please tap on “Grant” to complete the process).

How to Root Your Device?

Root without a PC

Note: Some devices can’t be rooted using an Android app. If your device is one of them, you will need to root it with the Windows version of Kingroot.

Root with a PC

A few years ago, security researchers Ryan Welton and Jake Van Dyke discovered two vulnerabilities in Samsung Account and Samsung GALAXY Apps. The vulnerability CVE-2015-0864 was assigned for Samsung Account (com.osp.app.signin), and soon Samsung was informed, and they patched the security flaw.

The patched versions of com.osp.app.signin are mentioned below.

[SOLVED] Samsung link sharing gone? Can you get it back?

What Does The Blue Dot Mean On Samsung Contacts?