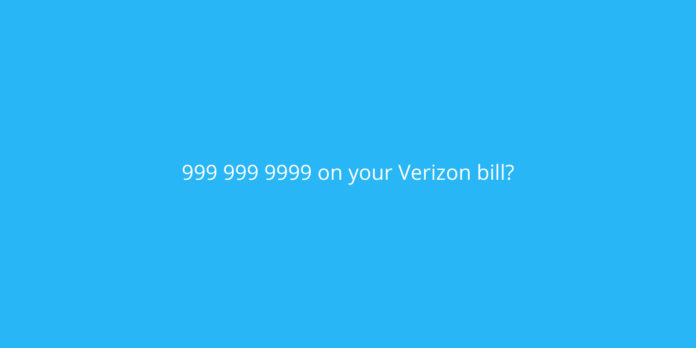 If the calls that are shown as coming from 999-999-9999 are all recent (within the last 24 to 48 hours), it is possible that the actual number has not been resolved and that it will appear at a later time. It is also possible that the recipient of the call has prevented their caller ID from being shown, making it impossible to see the number.

Regarding the numbers that appear on your text log, those are known as shortcodes, and they may be text notifications from an application or service that she has subscribed to. 32665 represents FBOOK, which stands for notifications on Facebook. Twitter’s identifier is 40404. It’s possible that 22383 is a local retail coupon program or an alert from a local radio station.

Can you delete calls from your phone bill?

Calls cannot be removed from your phone bill in any way, shape, or form. Even if you remove your call history or text messages from your mobile device, your mobile operator will still have a record of those communications in their system.

Your mobile phone service provider stores call logs, and you do not have any influence over them.

You might want to consider having a conversation with your mobile service provider about the situation. It’s possible that they have a solution. They could be able to opt out of detailed billing, in which case Call Detail Records (CDR) would not be included to the total.

It is expected of legacy communication providers that they will comply with any rules or regulations that require them to preserve a CDR that is totally correct. There is a possibility that the carrier will not be able to take individual calls or texts off of your phone bill.

This indicates that there is no way for you to permanently delete your call history from the account that it is stored in with your service provider.

Because telecom firms are compelled to maintain records of calls for a particular amount of time, they are unable to delete such recordings until after the required amount of time has passed. A violation of this provision is sufficient grounds for requesting that they have their license revoked.

The question that should be asked, then, is how long your service provider can retain your phone records on their server before deleting them? The answer to this question will rely on the License Agreement that the government has provided to each service provider.

How to hide incoming/outgoing numbers on the bill?

Your phone number will not appear on the phone bill of the recipient of your outgoing calls when you use the vertical service code *67. This applies to each individual call. Coordination with the persons who are calling you is required in order to remove incoming phone numbers from your bill. In order to prevent your caller ID from being displayed, they must always dial *67 after your number.

In addition, turning on caller id blocking each time can become tedious and troublesome. You have the option to adjust the settings on your phone to make all of your outgoing calls private. Instead of everyone seeing your actual telephone number, they will see “private number.”

The customer support center for your cell operator may have the ability to add a caller ID block for the calls that you make. But keep in mind that they are unable to do that for incoming calls. You have no choice except to request that the other side take the same actions.

Important: Even if you disable caller ID, your phone company will still be able to see the number you call from.

Make calls that you don’t need to make on your regular phone account by using a secondary phone, sometimes known as a “burner phone.” Some individuals purchase a disposable phone that comes with a second phone number and then use that phone exclusively for making private calls.

Typically, the line is prepaid, and it cannot be connected in any way to your principal phone bill. Cash can be used to purchase mobile devices, and prepaid minutes can be used on those devices before the SIM card is discarded.

Utilizing calling applications that act as middlemen for calls is a third method that can be utilized to conceal the phone numbers of both incoming and outgoing calls on the bill. Keep in mind, however, that the majority of calling apps, including a burner app, do not always provide a secure connection. Before making a decision, you should do some study. Investigate whether the service maintains its own call and message logs by reading the documentation.

The majority of VoIP providers, including Skype, RingCentral, Dialpad, and others, maintain their own call detail records (CDRs). Despite the fact that they are not included on your principal phone bill, you do not have any control over these logs.

How do I hide text messages on my phone bill?

Stop sending and receiving ordinary SMS text messages immediately if you want to conceal their presence on your phone bill. Mobile service providers are required to preserve accurate data, including call logs, according to Title 47 Section 42.6 of the FCC regulation. It is not possible to conceal texts sent over a short message service.

You might have heard that sending your communications through the Messenger app is the most secure way to conceal them. Sadly, the purpose of these apps is not entirely transparent. They will sell or leak your metadata to advertising, which includes information such as your location, the time of messages, the total amount of messages, as well as your sending and receiving phone numbers.

The metadata from each discussion is continuously collected by large companies such as Facebook, iMessage, WeChat, Snapchat, and WhatsApp, amongst others. In addition, your regular SMS and MMS messages might be accessed without your awareness by your mobile service provider, such as Verizon, T-mobile, AT&T, Google, and others like them.

To begin, you should terminate your use of these conventional messaging apps as a means of carrying out your communication. Make use of encrypted messaging services that are intended for private text instead, particularly ones that have open source licenses and are subject to public auditing.

Does a texting app show up on the phone bill?

When you send text messages from your phone using an application, you are making use of the data services provided by your phone provider.

You won’t be charged for any texts or phone calls made within the app itself. You will instead see the device that used the mobile service data as well as the amount of data that was consumed.

Unless the apps offer a backup for SMS messaging, the record of the messages won’t be displayed.

If the sender and the recipient are not using the same app, the messages will be sent over SMS or MMS channels, which were popular in the 1990s. If your selected messenger supports this feature, it will do so. You are sending your message through the unencrypted and logged service provided by your mobile provider, rather than sending it over the internet, where it would have been transported privately.

The earlier messengers on the list above either do not have an SMS fallback option or have an option to disable its use.