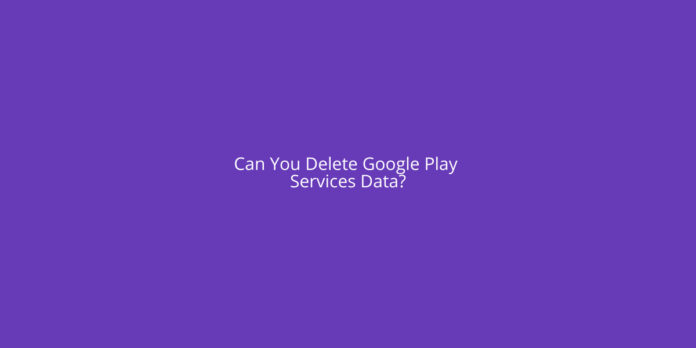 When you delete or clear data from a mobile app, you are essentially resetting the app to its original state, which will in turn wipe out all of the data that was previously stored in the application.

The same may be said for the Google Play services.

When you clear data or remove data from the Google Play Services app, you are returning the app to its original form, and this will wipe out all of the Google accounts that have been attached to the play services app.

It is important to understand that there may be few repercussions as well as advantages to deleting Google Play Services Data.

Discussing the repercussions, if you have signed into your Google Play account, you may lose important sing up information or payment card information until you sign back in again.

Another thing to note is that it is a common misconception that deleting Play Services data will delete your Google Play Account, however, this is not true. Your Google account and its data will remain intact and untouched.

Now that you know that you can delete Google Play Services Data, let us know how you can do it:

What Is Cached Data?

When you open an app, your phone uses the information saved in cache files to quickly recall the relevant data. Spotify, for example, may store your most frequently used playlists in a cache so that they don’t have to be reloaded each time they are opened. So that Google Chrome doesn’t have to download the huge image every time the page is reopened, the browser may store a cached image on a website that you frequently visit.

Only the linked program can make use of a cache file; Spotify, for example, has no use for Instagram’s cache. As soon as an app considers that the cached information is no longer usable, the accompanying cache files are typically deleted. Cache files are used by websites, apps, and games to provide a better user experience.

Cache isn’t just for Android phones; desktop browsers and other software programs also use it. Your device would have to reload images and other items every time you viewed them if it didn’t have a cache. This would be inefficient.

How to Clear the Cache on Android Devices?

The cache files for each app must be deleted individually on recent Android versions. Keep in mind that clearing your device’s cache is an unusual occurrence. Most storage or performance difficulties can be resolved by emptying the cache of a few problematic apps.

Cache data for an Android application can be cleared using these techniques.

This is all you need to do to clean the cache files on your Android phone for any app. Make sure to keep in mind that if you choose Clear Storage instead, you’ll delete all of the app’s data. It’s like you just installed it from the Play Store again. This should only be done if the program is acting badly.

What Happens After Clearing Android Cache?

Clearing cached files will free up storage space, and the software will resume regular operation. As a result of deleting the performance-enhancing data, some app features (such as the ones listed above) will run slower going forward.

When you clean your cache, you may notice that it reappears at some point. It’s typical for apps to build up cache over time, based on how often they’re used. You shouldn’t be alarmed if an app has a lot of cached files.

No big changes are expected to occur if you clear the cache. Nothing like your game progress or browser bookmarks will be erased. Alternatively, you may follow our step-by-step instructions for erasing Android cache and data for a more comprehensive cleanup.

You may get a notice on your phone urging you to connect to Google Play Services so your apps run. You’ll probably detect a problem before you get an alert. It is possible for apps to become unresponsive and for you to receive several push notifications stating that the service needs to be restarted.

You don’t need to contact Google or your phone maker to fix the problem. There are a few things to look into:

If you’re relying on cellular or WiFi data, make sure your connection is up and running. Google Play Services can have troubles if your internet connection is bad.

It’s possible that you’ll need to turn your phone off and on again from time to time.

In the event that you are still experiencing troubles, Google has a list of extra actions to fix problems on Google Play, which includes advice on managing Google Play Services.

Benefits of Clearing Cache on Android

There is no need to deal with the cache files, but they are crucial none-the-less. There are situations when removing cache files from your phone manually is beneficial.

Clearing the cache on Android is beneficial in the following ways:

Should You Clear Cache Regularly?

Now that you’re aware of the advantages of clearing cache, you might be tempted to automate the process. However, this actually has the opposite effect. It’s important to keep in mind that cached files can speed up the retrieval of content you frequently use.

As a result, hand-deleting old cookie files is not recommended. Deleted files are automatically removed via Android’s default process, which is generally reliable. When you need to manually delete cache files:

How To Free Up Storage and Manage Space On Your Phone?

The sizes of software, photos, and operating systems are all constantly increasing. With an older Android device, or even with a newer device’s entry-level model, you’ll soon run out of space.

One of the most frustrating feelings in the world is pulling out your phone to take an important photo and being greeted by the Storage Full message. As far as Android storage is concerned, how do you go about freeing up space? To learn more, keep reading this article.

Sure, we all need an email client, some social networking apps, a news app, and perhaps a few games on our phone. Do you really need the weather widget or the software that alters your face to resemble your dog? No, I don’t think so.

Android’s most recent versions make it simple to identify the most problematic applications. Find the Other Apps section in Settings > Storage > Other Apps and click on the link. You may sort the list by size by swiping the menu button in the upper-right corner and selecting Sort by Size.

Uninstall anything you don’t need by going to Settings > Apps & notifications > See all X apps and finding out what’s using up the most space.

In order to view content when you’re offline, a number of apps offer the ability to save content to your phone or tablet.

Using Spotify, you may download your favorite tunes and listen to them offline. Some RSS readers and bookmarking services like Pocket allow you to save articles for later reading. Chrome can save websites for offline use, while podcast apps can save audio files for offline playing.

If you have enough storage space, saving content for offline consumption is a good idea. Avoid being baffled by the disappearance of all your available storage space by failing to do so.

Taking a few wise steps will solve this issue. Use Spotify to create just the right playlist for your workout or commuting needs rather than downloading a bunch of albums that you won’t use. Avoid downloading large files from cloud storage services and only access the notebooks you use most often in OneNote.

There are two ways to remove previously downloaded offline content from your device. See all X apps in Settings > Apps and notifications > Clear caches for each one. You can clear the cache by going to [App Name].

Using Google Photos, you can be assured that all of your images are safely stored on the cloud. No matter how low the resolution is, they won’t take up any space on your Google Drive.

It’s easy to overlook the fact that Google Photos doesn’t save your photos to your device. As long as you have an internet connection, you may still access and view your photos in the Photos app.

You’ll be notified via an on-screen notification if you’re getting close to your storage restrictions if the app can help you save some space.

You can ask the app to check for you if you suspect you’re nearing capacity. Search for “Free up space” on Google Photos’s menu. After scanning your phone, the app will tell you how many photos have already been backed up and which ones you can safely delete.

Modern phones don’t support SD cards for a good reason: inexpensive SD cards have poorer read/write speeds than more costly ones. But many consumers won’t know that their SD card is to blame—they’ll simply assume their phone is slow. Manufacturers don’t like that; they’d rather you just buy a more costly model with more storage rather than a less expensive one.

SD card slots are more common in mid-range and inexpensive devices. This is a good thing, given that these gadgets often have a smaller built-in storage capacity than their more expensive rivals.

In Android, an SD card can be formatted to appear as internal storage. In Settings, touch on the three vertical dots in the top-right corner, then select Storage settings from the drop-down menu. Format as internal will get things started.

All stock Android devices come pre-installed with the Android storage management software Files. Although it lacks some of the features found in some of the top Android file explorer apps, it does a good job of organizing your downloads, shared files, and other documents.

However, one of the app’s most underappreciated advantages is the ability to free up space. It’s a part of the Android Settings app, so it’s easy to access. Go to Settings > Storage and touch on Free up space.

The Files app will open and begin assessing your storage. It will tell you what files you can safely get rid of, such as huge files, old files, and garbage files. To your satisfaction, you have the final say in the matter.