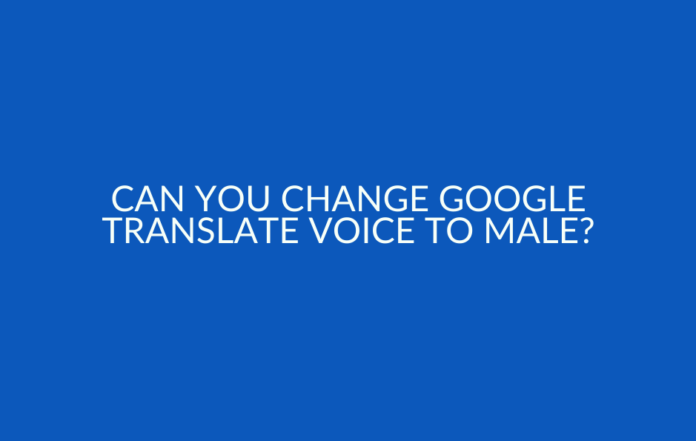 Google Translate has often come to the rescue when language becomes an obstacle more than a medium of communication. But, has it ever occurred to you that Google Translate mostly offers only female voice during translation? So, is there a way to change it? This is what we’ll discuss further in this post, along with answering a few important FAQs.

Can you change voice to male?

Why doesn’t Google Translate offer a change of gender of the voice?

Although Google has not been very specific as to why there is no option to change the voice to either male or female, the best guess would be that it is due to the fact that the Translator utilizes various modules of the program per language. These modules are only recorded in one language by either a male or a female in a professional studio, sometimes for hours. Recording the same module in both a male and a female voice is not only highly time-consuming but also makes little sense from a financial aspect. Therefore Google Translate offers translation in either male or female voice.

Can you change the accent in Google Translate?

What you can do instead is hear different standard country accents in Google Translate by using the speaker icons in different Google country domain sites. In some cases, it was seen that even after using the accent marks, the pronunciation wasn’t correct.

The plus point is that you can change the gender voice and accent-specific voices in Google Translate’s Android version on your phone’s OS and Google Assistant, where you get multiple accents to choose from – you can choose between male and female voice for any language too.

Which language in Google Translate has a male voice by default?

This way, you can find which languages are spoken in which gender by default on Google Translate.

Can you change the Google Translate voice on your phone?

Yes, you can change Google Translate voice on your android phone.

Here are the steps that you need to follow:

Install voice data and choose whether you want a male or female voice from the options given.

Why is it that some Google Translate language text-to-speech is still so bad?

Various tasks performed by machines or software are based on algorithms and codes with which they perform the tasks. It may happen that a machine can beat a human at chess, but it yet it cannot do the same with language.

Google Translate text-to-speech or TTS is an engineering project, and for the engineers, even if the tool works with 50% accuracy, it’s a success, and they keep improving the technology to raise the accuracy rate higher for certain languages. But still, there are some bugs, deprecated functionality, and other issues which pop up, making some languages not as good to translate as others.

How accurate is Google Translate?

The accuracy rate of Google Translate might not be 100% perfect for all languages, but it is increasing, and engineers and technicians are developing  Google Translate technology to make it successful and more useful yet handy.

In 2019, in a study, it was found that the results of Google Translate for Spanish were 90% accurate, and for other languages like Tagalog, Korean and Chinese, the accuracy rate was between 80-90%.

Can you change Siri’s voice to male or female on an Apple device?

Siri is a virtual assistant that is found in almost all Apple devices. In the beginning, Siri had a default female voice, which the UN criticized and asked to stop making digital assistants female by default, and program assistants to discourage abusive or sexist language.

Now Siri has both male and female voices with six different accents like American, Australian, British, Indian, Irish, or South American. To change Siri’s voice or its accent, you need to follow the following steps: